(CNN) -- Author Frank McCourt, whose tragic childhood became creative grist for his first book, the Pulitzer Prize-winning "Angela's Ashes," died Sunday, according to the Web site of his publisher, Simon & Shuster. He was 78. 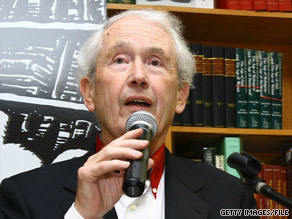 "Angela's Ashes," named after his mother, also won the National Book Critics Circle Award. It was translated and sold throughout the world.

McCourt wrote the two other memoirs, "Tis" and "Teacher Man," as sequels to "Angela's Ashes," and penned the children's book "Angela and the Baby Jesus."

The author was born to Angela and Malachy McCourt on August 19, 1930, in Brooklyn, New York, to Irish immigrants. The family fled to Limerick, Ireland, four years later, during the Great Depression era, only to become mired in even more gut-wrenching poverty.

Malachy McCourt, an alcoholic who managed to keep jobs only a few weeks at a time, left the family scrounging to survive.

Yet, he also brought joy to his children, as the younger McCourt wrote in "Angela's Ashes":

"Before bed we sit around the fire and if we say, 'Dad, tell us a story,' he makes up one about someone in the lane and the story will take us all over the world, up in the air, under the sea and back to the lane. Everyone in the story is a different colour and everything is upside down and backward. Motor cars and planes go underwater and submarines fly through the air. Sharks sit in trees and giant salmon sport with kangaroos on the moon. Polar bears wrestle with elephants in Australia and penguins teach Zulus how to play bagpipes."

In October 2006, McCourt told the BBC that he saw his family's struggles as part of the human experience, without casting his father as a villain. He also expressed sorrow about his mother.

"First of all, I feel so sorry that I didn't understand more about her life and her misery and the deaths of three children," McCourt said.

"I had one daughter and if she had a cold, I was up all night. If she had the sniffles, I was running to her little crib or her bed. ... When I was growing up and as I grew to manhood, I really didn't understand my mother's pain."

Asked about his Irish-American identity, McCourt told the BBC: "I'm actually a New Yorker, because that's what I feel passionately about. ... New York is the place that gets me all excited."

He returned to the United States at 19 and spent decades coming to grips with his youth.

"I dealt with my past, and my future and my present by writing about it. And it's really, it's a gift. I wish everybody had it, because it eases all kinds of distress," he told the BBC.

McCourt is survived by his wife, Ellen, and other family members, including brother Malachy McCourt, who is an actor and writer.