WASHINGTON (CNN) -- Ted Dekker spent his formative years living with cannibals. It's a helpful background for an author who writes novels about serial killers. 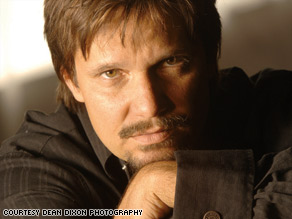 Ted Dekker's stories and worldview are shaped by his Christian roots and childhood.

Dekker's parents, John and Helen, were serving as missionaries in the tiny Indonesian village of Kangime when he was born. "I grew up in one of the darkest places in the world you can imagine, in [the] jungle, with cannibals. I know we have certain images in our mind when we talk about cannibals, but we're talking about animism, heavy spiritualism, tremendous amounts of fear," Dekker tells CNN.

It's a past Dekker, 46, embraces. His stories and worldview are shaped by both his Christian roots and his edgy childhood.

His latest novel, "BoneMan's Daughters" (Center Street), which hit bookstores this month, tells the story of an traumatized Iraqi war veteran searching for his estranged daughter, who has been abducted by a serial killer who breaks the bones of his victims without puncturing the skin. "Those with an insatiable appetite for thrillers about creepy, sadistic killers of young women should be satisfied," wrote Publishers Weekly with grudging approval.

In his 18 years in the jungle, Dekker says he saw his fair share of true-life horror. The memories have obviously lingered.

"Co-workers of my parents were killed and eaten. By cannibals," he says. "You were at threat of losing your life at any moment."

His father remembers the atmosphere a little less dramatically, though he says his son is correct about the incident, the facts of which are borne out by news reports. In 1968, American Phil Masters and Australian Stan Dale, who were part of the same missionary organization as the Dekkers, were killed and eaten by tribesmen.

John Dekker says Ted was sent off to school in 1969 when he was 6. "In the first month or so he heard of the killing of these colleagues we had. It was an age when he was very affected by new things and boom. You can see how this really affected him," he says.

Moreover, adds the senior Dekker, the missionaries' children went to school on the Indonesian coast, a world away from their families -- travels that could have also made an impression on the young Dekker.

Ted Dekker tries to inject that remembered anxiety into his work. "I grew up in this environment, and it affected the way I viewed light and darkness. My parents brought into that very dark [and] ominous setting hope, light, penicillin, hygiene. The culture changed dramatically, not as a result of Christianity -- at least not upfront -- but as a result of them bringing into a very dark place hope and light. My stories reflect that paradigm shift."

Dekker's 20-plus novels have sold more than 3 million copies, indicating there's a sizable audience for horror with a twist of holy light. But he finds himself straddling two worlds. His early literary career was largely supported by Christian bookstores, which welcomed the faith of his heroes.

More recently, however, his readers are increasingly more mainstream horror and suspense fans. That's OK with Dekker, who rejects being pigeonholed as a "Christian author."

"My stories are not Christianized at all. I don't even have any Christians in my stories," he says. "What they are, are stories about ordinary people going through extraordinary circumstances in which I'm exploring truth. How light overcomes darkness in a way that's unmistakable to anyone who has any kind of faith."

He adds, "There's also a large group of people who find my presentation of the darkness a little too much."

Dekker's popularity among mainstream audiences is an anomaly, according to Henry Carrigan, an editor at Northwestern University Press and a former book critic of spiritual fiction. In general -- with the occasional exceptions of works such as the "Left Behind" series -- fiction written by Christian authors has had a difficult time breaking into general retail bookstores.

"Good writing is lacking in a lot of Christian fiction. It's pedantic, the prose is awful, the writing is static and it's difficult to believe the characters," Carrigan says.

Though Christian publishers pushed hard to get their authors on mainstream shelves, what eventually did often was shelved away from fiction under a subsection called "inspirational fiction." "Even though they made the crossover, they didn't make the crossover. They were ghettoized," Carrigan says.

Dekker has succeeded, Carrigan says, because "he knows how to write." Describing Dekker's style as " 'CSI' meets God and Satan," the editor observes, "He knows how to use the formula when he uses a formula. He can suck people in. That's why he's been so successful."

Bill Anderson, president of the Christian Booksellers Association, says that Dekker "[has] got the pole position on that [crime thriller] genre."

Dekker's mainstream success bodes well for his future. The author says his new work is heading in the direction few other authors are heading -- coming at the horror genre head-on from a decidedly Christian perspective. He's well aware he's more or less alone in his field.

"Exploring truth through a serial killer who abducts women, when they fail to meet his expectations as a daughter he breaks their bones one at a time -- starting with their extremities -- is new," he says. "There's very few people doing that."

All About Indonesia • Books • Religion