(CNN) -- "Where is John Galt?" reads a sign in the back of a vehicle heading down Interstate 85 in Atlanta, Georgia. 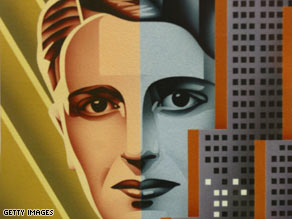 Ayn Rand, shown here on a 1999 stamp, is finding new readers thanks to the economic crisis.

The quotation is wrong. As any reader of Ayn Rand's "Atlas Shrugged" can attest, the correct line is "Who is John Galt?" but the point is well taken.

In the midst of the credit crisis and the federal government's massive bailout plan, the works of Rand, a proponent of a libertarian, free-market philosophy she called Objectivism, are getting new attention.

"If only 'Atlas' were required reading for every member of Congress and political appointee in the Obama administration. I'm confident that we'd get out of the current financial mess a lot faster," Wall Street Journal columnist Stephen Moore wrote in early January.

It's obviously getting attention from the general public. Rand book sales are "going through the roof," said Yaron Brook, the president of the Ayn Rand Institute. According to Brook, "Atlas Shrugged," her most famous novel, has sold more copies in the first four months of 2009 than it did for all of 2008 -- and in 2008, it sold 200,000 copies. It's been in Amazon.com's top 50 for more than a month.

Watch why Rand is so beloved »

Even Hollywood is said to be interested, which is only fitting, since Rand was once a screenwriter. But developments have come in fits and starts. "Godfather" producer Albert S. Ruddy once wanted to make a film and talk of miniseries adaptations emerged in the '70s and '90s.

In 2006, Angelina Jolie was said to have been signed to star as Rand's heroine, rail magnate Dagny Taggart, and names such as Russell Crowe and Brad Pitt have also been floated. However, as of early 2009, the status of the film remains unknown.

"Atlas Shrugged" concerns a group of corporate chieftains and individualists who go on strike in protest of government intervention in business. Among those trying to figure out what's happening are Taggart and steel tycoon Hank Rearden. Eventually they meet John Galt, an engineer who had been elevated to legendary status by "stopping the motor of the world" in encouraging other individualists to drop out, and who delivers the novel's showstopping 50-page speech -- an expansive summary of Rand's philosophy.

Upon the book's release it divided critics and readers, some of whom praised its message of self-sufficiency. More, however, disliked Rand's politics and atheism, not to mention her writing.

"Is it a novel? Is it a nightmare? Is it Superman -- in the comic-strip or the Nietzschean version?" Time magazine asked in its review, adding that Rand's "philosophy must be read to be disbelieved. ... She deserves credit at least for imagination; unfortunately, it is tied to ludicrous naivety."

But Rand's book -- which followed 1943's "The Fountainhead," about a Frank Lloyd Wright-like architect determined to follow his own path -- was a best seller and has continued to be significant. In 1991, a Library of Congress/Book-of-the-Month Club survey named it No. 2 among respondents' most influential books, after the Bible.

Her philosophy of selfishness and her love of pure capitalism (she used to wear a dollar-sign brooch) has earned her many followers, particularly on the right. Rush Limbaugh is a fan; former Federal Reserve Chairman Alan Greenspan was a Rand acolyte in his younger days and a member of her New York salon.

But Rand critics are equally fervent, questioning her belief in pure free markets.

"What I find so remarkable about it is if capitalism can work on its own without any government regulation, then we wouldn't be here," said economist Heather Boushey of the left-leaning Center for American Progress.

Boushey points out that even Greenspan has reversed course, to an extent, in his admiration of laissez-faire economics.

"Those of us who have looked to the self-interest of lending institutions to protect shareholders' equity -- myself, especially -- are in a state of shocked disbelief," Greenspan told a congressional hearing in October.

The Rand Institute's Brook points out that, to Rand, selfishness did not mean disengagement from the world or sociopathy. "Rational self-interest, egoism, in Ayn Rand's perception is not being Bernie Madoff, not thinking short-term and satisfying just whims, and cheating and lying and stealing," he said. "It is about pursuing what's truly in your rational, long-term self-interest, figuring out what's good for you, without exploiting, taking advantage, without stealing from other people, without sacrificing from other people to yourself.

"But also," he added, "without sacrificing yourself to other people." iReport.com: Tribute to favorite book "Atlas Shrugged"

It's that debate over shared sacrifice that will likely continue to fuel Rand's critics, as well as her admirers. At bookstores, it will likely keep cash registers ringing, which could only have made the dollar-sign-wearing author very happy, indeed.