(CNN) -- Fans of the character Easy Rawlins don't want to hear it, but author Walter Mosley says he has officially moved on. 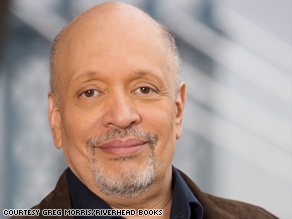 Author Walter Mosley found fame with his Easy Rawlins mysteries and has debuted a new series.

The prolific writer seemingly wrapped up his beloved series -- which spawned the 1995 film "Devil in a Blue Dress" starring Denzel Washington -- in 2007 with the 10th Easy Rawlins mystery, "Blonde Faith."

The ending saddened die-hard fans who had faithfully followed the adventures of the Los Angeles, California-based everyman-turned-private investigator whose stories played out in an era from the Jim Crow 1940s to the politically charged 1960s.

Now Mosley, who has found success writing everything from erotica to science fiction, has launched a new mystery series with the release of his book "The Long Fall" (Riverhead).

But the new novel takes Mosley to a different place and time. Instead of mid-20th century Los Angeles, "The Long Fall" is set in modern-day New York, where McGill is finding it hard to leave his less-than-stellar past behind.

That past includes a childhood as a red-diaper baby abandoned by his union organizer father and left to fend for himself at an early age, a loveless marriage to an unfaithful woman named Katrina and a son who's a burgeoning criminal mastermind.

Moreover, he's at work on a case where you just know people are going to die.

Such page turners are nothing new for Mosley, who is known for his strong, black male characters and his passionate musings on race, politics and the writing life.

McGill's creator recently spoke with CNN about the new mystery novel, why he doesn't miss Easy, and how the changes in the United States are mirrored in his writing. The following is an edited version of the interview.

CNN: Why leave Los Angeles for a setting in modern-day New York?

Walter Mosley: I have been a resident of both cities. The new series being contemporary and about a character who in some murky ways reflects where America is right now, New York seemed the right place for that.

CNN: How so? Where do you think America is right now?

Mosley: I think that America has made a decision, after about 20 years of going in one direction, to go in another direction: to leave rampant and amoral kind of deregulation and also rampant and immoral wars and say, "Maybe we should be doing the right thing instead of the wrong thing," or redefining what the right thing is, at any rate.

Those kinds of decisions, there are only two places [the setting] can be, and that's either in Washington, D.C., which I feel is very limiting because it's a one-business town, or New York, where everything from economics to government is centered.

So I decided on New York.

Mosley: Yes, I think that's exactly what's happening. I think America is trying to seek redemption after having done many things wrong in the eyes of the world in general.

Leonid McGill is trying to seek redemption after a long criminal history. His history is somewhat forgivable, but still it's criminal.

CNN: Did you approach this book differently than you did when you were writing the Easy Rawlins mysteries?

Mosley: Yes and no. All books are different, so each of the Easy Rawlins books I wrote I approached differently. [Leonid] is a new character and he has a unique life that I had to begin to learn. I knew Easy very well, but Leonid I had to learn who he was.

CNN: In your new book, I love that McGill's wife's name is "Katrina" and she leaves lots of destruction in her wake.

Mosley: [chuckling] It's true, but the first story I wrote about Leonid [a story called "Karma" published in the anthology "Dangerous Women"] was before the hurricane and that was a long time ago. It's funny that it worked out like that.

Mosley: This is the first time in my experiments in crime fiction that I've written a hard-boiled detective character. This is going all the way back to the beginning of the genre in the '30s, where you have a guy who gets thumped upside the head a lot and he's just as bad as the people he's after.

In the old style, you never knew what was going on inside the hard-boiled character's head, but in these stories I am actually discovering the underlying character of the hard-boiled detective, and for me that's been a great deal of fun.

CNN: You've written so many various genres. What is it about the genre of crime fiction that appeals to you?

Mosley: Originally I got into it because you can talk about worlds that people wouldn't read about ordinarily unless they had a particular interest in it. Everybody reads crime fiction and they read it to find out about different worlds.

I like writing in different genres. There's all this stuff that I really enjoy doing because I think they all serve different purposes.

And listen, I'm known as a crime writer, people like it and I enjoy it.

CNN: For your fans, a lot of them miss Easy Rawlins. Do you miss him at all?

Mosley: No, he's right there on the shelf. All I have to do is reach up and pull him down.

I'm finished with that. I'm moving on.