(CNN) -- After being hidden away for years, a copy of the original "Action Comics No. 1" comic book, featuring Superman and friends, will make a comeback -- to the tune of about $400,000, a comic expert told CNN Thursday. 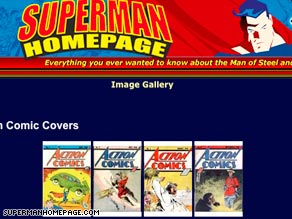 A Superman Web site features Action Comics covers, including No. 1, at left.

Starting Friday, comic book collectors and Superman fans will have the opportunity to bid on a comic classic -- an "unrestored" copy of Action Comics No. 1, said Stephen Fishler, owner of Comic Connect, an online liaison between comic book buyers and sellers. The book's owner is not being identified.

The auction is attracting a lot of interest.

"One bidder wanted to trade his Ferrari for the comic book," as part of an under-the-table deal, Fishler joked. But he said the auction will remain public. "I couldn't see myself trading in my Toyota Prius" -- even for a $375,000 car.

Why is this comic book so unique?

"Of the 100 existing copies, 80 percent have been restored, but people want an untouched copy," Fishler said. The book is listed in "fine" condition, a six on the 10-point rating scale.

"It's the Holy Grail of comic books," Fishler said.

Co-created by Jerry Siegel and Joe Shuster, the comic book first appeared on newsstands for 10 cents a copy in June 1938.

Nearly 12 years later, a young boy on the West Coast found himself in a secondhand book store, where he persuaded his dad to loan him 35 cents to buy the comic book.

Until 1966, the owner forgot about the book, which was hidden in his mother's basement. Since then, he's been holding onto it, hoping to see it increase in value, Fishler said. He has not been disappointed.

"There has been a lot of interest shown on the book in the collectibles market," said Fishler, who predicted the comic book will sell for about $400,000. But, he added, no minimum price has been set for the auction, so "whatever it sells for, it sells for.

"I've known Action Comics to sell for around $750,000," comic book sales associate Bill Peterson said. "I don't have any intention on making a bid, but I know people who don't mind dropping several thousand for a classic comic."

The comic book marked the first appearances of Lois Lane, Giovanni "John" Zatara and, of course, Superman. The book is in high demand because "there was no such thing as a superhero before Superman. It spawned everything that came after -- like Batman and Spider-Man," Fishler said.

Even during the current economic downturn, Fishler expects the book to do well.

Those who can afford to bid, he said, "would ordinarily put money into the stock market. But that's a shaky proposition." These days, the comic book may even be a better investment than putting money into a CD or a bond, Fishler speculated. iReport.com: Would you give up your prized possession?

Because the book was published at the close of the Great Depression, it contains advertisements that may appear quaint and quirky to 21st century readers. For only $1.25, one could buy a blonde wig, a live chameleon, a whoopee cushion, a Bible "the size of a postage stamp" and hypnosis lessons.

"Some books seem to go in and out of fashion," reads the auction blurb at comicconnect.com. But "Action Comics No. 1 will never be one of those books."

All About Comic-Con International