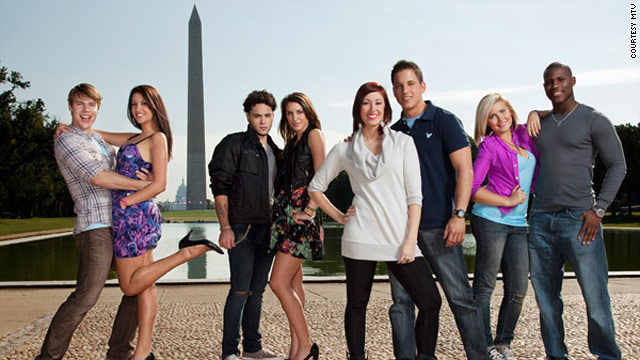 Reality performers, such as the cast of "The Real World: Washington, D.C.," have to sign detailed contracts.
STORY HIGHLIGHTS
RELATED TOPICS

(CNN) -- In the past decade, reality television has evolved from a programming renegade into a primetime staple of network lineups. For shows such as "The Real World" -- still going strong after nearly two decades, with its latest edition premiering Wednesday -- there is no shortage of willing participants.

But before the cameras begin to roll, reality show hopefuls must agree to incredibly thorough contracts, with little room for negotiation.

They know from the outset that, from a legal standpoint, it's not the fault of the production company if they get into in a bar fight, contract a sexually transmitted disease from a cast member or simply find the show to be more emotionally damaging than they ever thought it would be.

While the needs and issues for each show are unique, a typical contract includes "100 reasons why you can't sue," said Eric Goldman, an assistant professor who teaches contract law at Santa Clara University's law school.

"They're also going to try and say, 'If you're creative enough to come up with the 101st reason, you can't sue us for that either,' "Goldman said. "These contracts are usually all-encompassing in their efforts to get their participants to waive rights to release claims."

Producers have to be thorough, said Sonny Hutchison, co-creative officer of High Noon Entertainment, because potential participants "don't always know what they're getting into. The situations and some of the scenes that we come up with are still being developed or are developed after our participants sign on."

High Noon Entertainment, which produces shows including VH1's "Tough Love," follows the industry standard of conducting extensive background checks plus physical and psychological exams while weeding through show hopefuls to prevent potential mishaps as much as possible.

Even with healthy participants, producers and attorneys for athletic or physically demanding shows in particular have to break down all of the horrible things that can go wrong before asking the would-be cast member to sign on the dotted line. If there's even a remote possibility that you could die on the show, it definitely won't be buried in the fine print.

"You have to sit there in all of your paranoia and think about what could possibly happen if the worst disaster in the world happened and you have to disclose that in a way so they know what they're waiving and you don't get sued," said Steven Katleman, an entertainment and media attorney .

If something detrimental were to happen -- even if it's something like a twisted ankle after tripping over a camera cable backstage -- production companies typically have insurance to cover the damage.

"We make sure that medical coverage is available, if needed," Hutchison said, "and that's for crew or participants. As a company, you need to be ready with worker's comp coverage, and crews typically know what facilities are close by."

On live-in reality shows, the concern is extended to the drama of the cast's social interactions.

"When you're living in the house together, you have to worry about living in a house of complete strangers who have been selected to create conflict in a hermetically sealed and stressful environment," Katleman said. "That can lead to a lot of emotional distress on the part of the contestants. You have to cover those things in the release; you have to explain to them that you're going to be living in this house in a stressful situation. If you're in a situation where there are potential hookups, you have to disclose to them that it's possible that there will be sexually transmitted diseases. That also has to be included in the release."

Potential reality show participants also need to be clear that they're waiving some rights to privacy. "We ask them to understand that they may be exposed to invasion of privacy," Hutchison said. "They're going to give up certain elements of privacy, not all, because we respect our participants. The cameras aren't going to roll 24 hours a day."

The cameras will be there to catch the everyday embarrassments -- like when you've woken up with a horrible case of bedhead -- but they won't accompany you into a bathroom stall. "The boundaries have been stretched on reality television, there's no question, but honestly, in terms of ethical behavior, the line has been drawn," Hutchison said.

When it comes to competitive reality shows, Goldman said, the contract is the production company's way of controlling the value of a potential star.

"To the extent that we've learned anything from reality TV show contracts, it's that there is a star-making effect to those shows. A production company would want to control the value of an individual by [contracting] if they become a breakout star; we get the money from what we helped create."

While each contract is drafted specifically for a particular show with the input of the production company and the show's network, there's a staple in nearly every reality show contract, and it's also the most obvious: Should you choose to go on a reality show, your contract will stipulate that the production company has the right to portray your image in any way, shape or form.

"You're giving up a right of publicity," said employment attorney Kelly Scott, who does not counsel High Noon Entertainment or "The Real World." "You're allowing them to use your face and name in the advertising, the promotion, the packaging and the repackaging of the show."

This clause has to be there, Hutchison said, because "the network needs to be able to exploit the material for their purposes. There's a big investment in these shows, and they need to be able to use the material, typically in perpetuity."

When you agree to that, you're also wholeheartedly agreeing to the prospect of being portrayed in an unfavorable light.

"The network doesn't want to be in the overall position where they get into a dispute with the subject if they don't like the way they're portrayed. This isn't like watching a court transcript -- these [shows] are edited to create a dramatic effect," Katleman said.

"Because of that, it's essential that the participant gives a full and complete release of any claims arising from how they're portrayed, and the release agreements aren't subtle," he said. "They will not say in passing, 'Oh, by the way, you're going to waive defamation'; they're going to say, 'the show will be edited, you may find your portrayal to be embarrassing, humiliating, negative, defamatory,' and they really want to make it very, very clear what they're waiving."

And, unless you are already a celebrity, you don't really have much leverage when it comes to your contract.

"[Participants] have no bargaining power," Scott said. "They're anxious to have this happen for them, and they're willing to sign over a lot. As long as the contract isn't egregious, [production companies] get away with it. Few people have been successful in breaking them."

Even so, Hutchinson said, production companies will negotiate on occasion.

But he said negotiations are rare for novice cast members, because "it's difficult to treat one [cast member] differently than the other, and you're setting yourself up for issues later."

So in most cases, potential participants either accept the terms as they are or let another hopeful take their place.

"In general," Goldman said, "when courts are presented with a contract and people are saying, 'I don't like the deal I struck with this reality show,' most of the time those contracts are going to be upheld because everyone knows what's going on.

"It's hard to engender sympathy of a judge when we all know that the person signed up willingly and enthusiastically for a reason that was clearly valuable to the participant,"