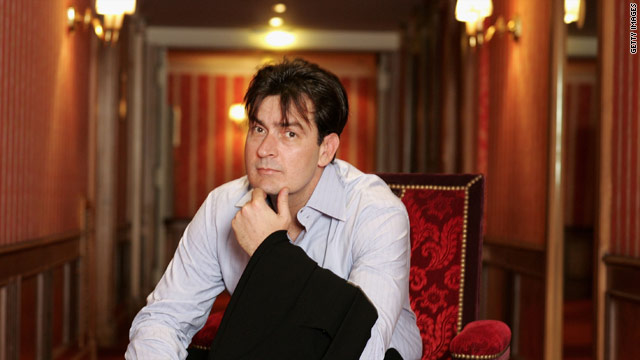 Charlie Sheen topped the list of highest paid TV actors, earning a reported $825,000 per episode of "Two and a Half Men."
STORY HIGHLIGHTS
RELATED TOPICS

(CNN) -- Will the Christmas Day arrest of one of America's highest-paid television actors spell the end of his career? When that actor is Charlie Sheen, the answer is probably not.

Sheen, 44, whose real name is Carlos Irwin Estevez, has known scandal before and has worked each of his arrests, divorces and indiscretions into the canon of bad-boy lore that has made him essentially scandal-proof.

"Charlie Sheen has bounced back from various scandals, and I don't think anyone expects anything more from him," said public relations expert Vanessa J. Horwell, founder and Chief Visibility Officer of ThinkInk PR. "Bad-boy behavior is part of his persona that's been a work in progress since the 1980s. He has bounced back time and time again."

The latest scandal to rock Sheen's world is his December 25 arrest in Aspen, Colorado, on second-degree assault and menacing charges, both felonies, and criminal mischief, a misdemeanor. Sheen has been married to sometime actress and real estate investor Brooke Mueller Sheen, 32, his third wife, since May 2008. The couple have twin sons who were born in March. They were reportedly having an argument when he was arrested.

A 911 call released by Aspen police on Monday revealed Mueller Sheen reporting a domestic abuse case and alleging that Sheen was threatening her with a knife.

Sheen's publicist Stan Rosenfield issued a statement following the arrest on Friday urging against a rush to judgment against his client.

"Do not be misled by appearance," Rosenfield said. "Appearance and reality can be as different as night and day. It would benefit everyone not to jump to any conclusion."

While any claims of violence against women, whether real or alleged, can be career ending for a celebrity, Sheen seems to be a special case. This is not the first time he has been at the center of a domestic violence scandal, and the stories don't seem to harm his reputation.

Sheen's long history of questionable behavior began in 1990 when he was dating actress Kelly Preston. Reports surfaced then that Preston had been shot in the arm. In 2001 Sheen explained to Playboy magazine that it was a "complete accident. I wasn't even in the room. She picked up a pair of my pants. ... A little revolver fell out of my back pocket, hit the bathroom floor and went off. It shot a hole through the toilet and she got hit in the leg with shrapnel."

The couple split soon after the incident and Preston married actor John Travolta in 1991.

In 1994 Sheen was the only celebrity client whose name was publicly released during the trial of "Hollywood Madam" Heidi Fleiss.

In 1996 adult film actress Brittany Ashland accused Sheen of throwing her on the floor and splitting her lip. Sheen pleaded no contest to battery charges and was fined $2,800. He entered rehab in 1998 after an alleged drug overdose.

During the course of his divorce from model-turned-actress Denise Richards in 2006, Richards filed a restraining order against Sheen, claiming he tried to kill her.

Sheen released a statement at the time saying: "Obviously, what has taken place is vile, is unconscionable, is without merit, is a transparent and immature smear campaign. She's claiming certain things. It's baseless."

Sheen and Richards have continued to have a rocky relationship, often arguing over issues regarding the couple's two children Sam, 5, and Lola, 4.

Sheen is currently a high-profile pitchman for Hanes clothing products. In one recent commercial, as he attempts to talk with retired basketball star Michael Jordan, he buffoonishly crashes his car and is cheered on for his antics by a parking valet.

Bob Oltmanns, who teaches public relations at Carnegie Mellon University, believes that the most recent incident won't harm Sheen's status as a commercial spokesperson. He compares Sheen with Tiger Woods, who was dropped by a number of sponsors in the wake of his own sex scandal where he admitted infidelity, though Woods unlike Sheen has not been charged with any criminal wrongdoing.

"The Sheen scandal is a pretty stark contrast to Tiger Woods. This behavior is built into the fabric of Charlie Sheen's bad-boy profile, unlike with Tiger where it was unexpected," said Oltmanns. "So I think he will bounce back as long as his popularity on his show remains high. People were shocked with Tiger Woods because the behavior didn't fit the image. People are much less shocked with Sheen because the behavior does fit the image."

Sheen, the son of actor Martin Sheen, had his breakthrough film role in 1986 in the Vietnam War drama "Platoon." In 1987 he starred with his father in the ode to 1980's greed, "Wall Street." He also appeared in the comedy franchises "Hot Shots" and "Major League."

In 2003 Sheen was cast as the lothario brother Charlie Harper on the CBS sitcom "Two and a Half Men," along with Jon Cryer. His character -- a freewheeling and hedonistic commercial jingle writer whose life is complicated when his divorced brother and nephew move into his beach house -- was loosely based on Sheen's own rogue image.

In May CBS renewed the series for three more seasons and in 2008 Sheen topped the list of the highest-paid actors on television, earning a reported $825,000 per episode. "Two and a Half Men" has an average run of 23 episodes per year.

A representative for Sheen said in an e-mail Monday that his client would not be losing his endorsement deal with Hanes or his role on "Two and a Half Men." Calls and e-mails to CBS regarding Sheen's future on the show were not returned, but veteran showbiz observers agree that because Sheen's alter ego on the show depends in part on Sheen's real-life shenanigans, his role should not be in jeopardy.

"Business is going to continue as usual for Charlie after the holidays are over," said Rebecca Brooks, crisis manager and president of The Brooks Group. "The events of the past week have been sad, but not surprising, and definitely not career-ending."