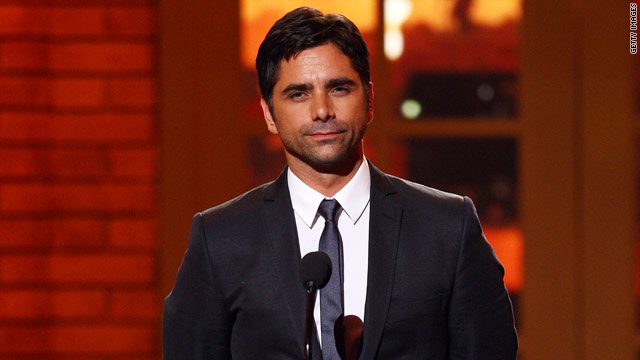 John Stamos "is not at liberty to discuss the matter at this time," his publicist says, citing a pending federal investigation.
STORY HIGHLIGHTS
RELATED TOPICS

Stamos was allegedly blackmailed for $680,000 by a man and a woman threatening to sell photos to tabloid magazines that, according to Stamos' camp, feature the actor posing with fans.

The couple said the photos would harm Stamos' reputation if made public, an FBI affidavit said, but no further details of the photos were released.

"John Stamos was the target of an extortion attempt. The U.S. attorney and the FBI handled the investigation swiftly and with great expertise," said Stamos spokesman Matt Polk in a statement. "Since this is a pending federal criminal prosecution, John is not at liberty to discuss the matter at this time."

Polk said the photos in question are of Stamos posing with fans and that at the conclusion of an FBI investigation, the photos will be made available to the public.

The man and woman were arrested last week after meeting for a money drop with an undercover FBI agent posing as a representative for a person identified in an FBI affidavit as "Mr. X," according to the affidavit, posted on the Web site TheSmokingGun.com.

According to TheSmokingGun.com, "Mr. X" is Stamos.

A raid on the home of Allison Coss, 23, and Scott Sippola, 30, turned up three photos of "Mr. X," a piece of paper with his personal cell phone number on it and a list of three tabloid magazines with contact numbers for each, according to the FBI.

"Mr. X" allegedly met Coss at a party while he was vacationing in Florida in 2004, according to the FBI affidavit.

Coss and Sippola have been released on bond and ordered to have no contact with Stamos, TheSmokingGun.com said.

Stamos starred in the sitcom "Full House" and in the medical drama "ER." He is appearing on Broadway in the musical "Bye Bye Birdie."