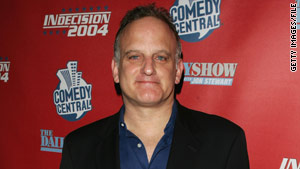 Ober hosted five seasons of "Remote Control," a pop-culture quiz show that featured contestants strapped into easy chairs to answer questions from categories such as "Dead or Canadian?"

The show first aired in 1987 and helped launch the careers of comedians Adam Sandler, Denis Leary and Colin Quinn, who was the program's announcer. Blog: Remembering Ken Ober

Ober later moved behind the camera as a producer of the Comedy Central program "Mind of Mencia" and the CBS comedy "The New Adventures of Old Christine."

Ober's agent, Mark Measures, said Ober was found dead at his home in Los Angeles. No cause of death was immediately known.