'Sesame Street's' been swept, but the magic of show remains 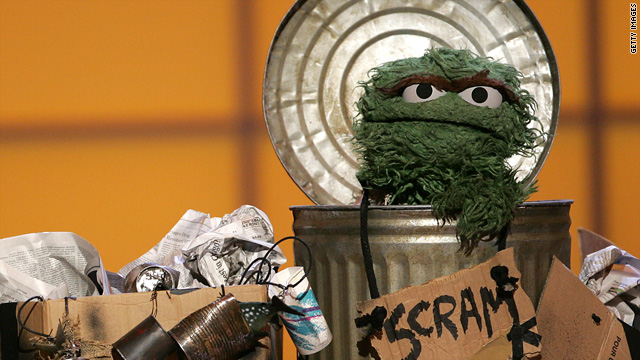 When "Sesame Street" premiered, Oscar the Grouch was much grouchier than he is today.
STORY HIGHLIGHTS

The brownstone at 123 Sesame Street looked like it needed a serious power washing, the storefront of Mr. Hooper's shop was intentionally dingy and the Fix-It Shop's window was cluttered with toasters. It was gritty, but gritty in a magical way.

When the show started in 1969 ("Sesame Street" will celebrate its 40th anniversary on November 10), the concept of educational television programming was nothing short of revolutionary. "Sesame Street" was originally intended as a learning tool for inner-city children -- not only as a supplement to their lessons in math and the ABCs but to teach them to be good people and show them that learning can be fun.

Those early years are now available on DVD; and the discs contain a disclaimer that essentially states that they are intended for nostalgia purposes only. The warning reads as follows:

"These early 'Sesame Street' episodes are intended for grown-ups, and may not suit the needs of today's preschool child."

Say what!? Never did I ever think I'd see "Sesame Street" and "intended for grown-ups" in the same sentence. iReport: What letter of the alphabet would you like to pay tribute to?

He later eats the pipe because, as he was often prone to doing, he thinks the pipe is a cookie. Cookie Monster used to become so overwhelmed by his desire for cookies that he'd start seeing (hallucinating about?) cookies that weren't actually there. He'd eat (rotary) telephones, typewriters (what are those?), pencils, almost anything. It was funny.

Today, Cookie Monster's diet is much more balanced, as he has adopted the philosophy that cookies are a "sometimes food." Cookie coincidentally changed his tune in 2006 amidst reports that childhood obesity had reached epidemic proportions.

Early "Sesame Street" had some other elements that would not pass muster today. Oscar the Grouch is just plain nasty, children are seen riding their bikes without helmets, and there's even a sketch where the human character of Gordon can be seen approaching a little girl on the street. He takes her by the hand and brings her into his house for milk and cookies (again with the cookies!). Clearly, that could be misinterpreted by today's standards.

Now, some 4,000 episodes later, 123 Sesame Street has gotten that power washing. Peeling paint is nowhere to be found, and the only visible garbage can has a tenant. It's much more sanitized. I'm tempted to make fun of this, but then I notice the bottle of anti-bacterial hand gel on my desk and bite my proverbial tongue.

For better or worse, today's preschooler is very different from the 1969 version. And children's television programming simply has to reflect that.

But one thing hasn't changed on "Sesame Street": the unflinchingly genuine attitudes of its residents. For 40 years, they have taught us that sometimes we are going to get hurt, cry and be lonely. They've taught us that there'll also be times when we're downright jovial. All the while, those characters have remained sincere.

We may never see Cookie Monster eat a pipe again, but luckily the memories are preserved on DVD, and in our hearts.