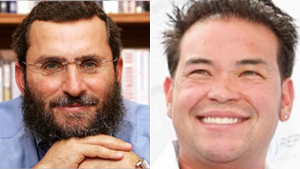 But now, given relationship dramas and bad press, the father in "Jon & Kate Plus 8" is looking to a higher authority.

In a statement released to CNN, Gosselin said he is receiving "regular study sessions and counseling" with Rabbi Shmuley Boteach, well known as a spiritual adviser to Michael Jackson.

Boteach, the author of the book "The Michael Jackson Tapes" and host of TLC's "Shalom in the Home" series, has linked up with the beleaguered "Jon & Kate Plus 8" for an upcoming seminar titled "Fame: Blessing or Curse?" to be held at a synagogue in New York City.

Gosselin said in his statement that he is "troubled to learn that the media has accepted as true the scurrilous rumor that I would appear in a reality television program with Nadya Suleman" and goes on to say that such reports are "utterly false."

"I do however accept that some of my previous actions have in some way lent credence to such outrageous stories," Gosselin said. "I am well aware that my behavior over the past few months has not always reflected my personal and religious values. I further accept that I have allowed myself to become somewhat severed from my own moral anchor and be carried away by the challenges of fame."

For that reason, the father of possibly the most famous set of twins and sextuplets said he has sought the spiritual guidance of Boteach, who is himself no stranger to the camera.

I am well aware that my behavior over the past few months has not always reflected my personal and religious values.
--Jon Gosselin

Boteach bills himself as "one of the world's leading relationship experts and spiritual authorities."

According to his author bio in "The Michael Jackson Tapes," Newsweek referred to him as "the most famous rabbi in America." Among his achievements: a National Fatherhood Award.

Gosselin could certainly use the help.

Since his high profile breakup with his wife in August, the reality star has been slammed for reports of his involvement with other women and extravagant spending sprees.

Earlier this month TLC announced he would be cut from the show and that plans were under way for a "Kate Plus 8" series. That show was put on hold after Jon refused to allow his children to be filmed. The network has since filed suit against him for breach of contract.

He and his estranged wife also headed to court after she accused him of looting their joint account of more than $200,000. A Pennsylvania judged ordered him to return $180,000.

Most recently, Gosselin's girlfriend, Hailey Glassman, accused him of being "emotionally abusive" and throwing "mantrums" because of his frustrations.

Gosselin said in the statement that he regrets having "betrayed the moral principles that have always guided me" and said he is committed to making things right with Kate and his children.

He turned to Boteach, he said, because the rabbi has counseled others in similar circumstances. Gosselin said Boteach has made clear to him the "moral obligations inherent in celebrity."

"It is my sincere desire to use the fame I have so unexpectedly acquired to highlight mature, responsible behavior as well as the joys of fatherhood and family," he said. "I ask the public to please understand the challenges I face in living under constant public scrutiny, even as I am aware that I have at times courted that scrutiny."