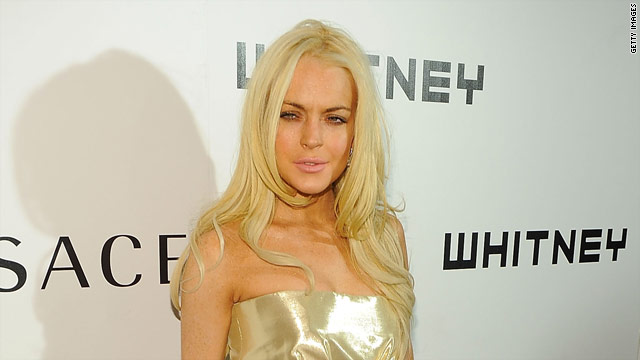 Lindsay Lohan had an estimated $128,000 in jewelry, designer clothes and accessories stolen from her home.
STORY HIGHLIGHTS

(CNN) -- They've been called the Hollywood Hills Burglar Bunch and the Bling Ring. Now, five of the six young adults accused of burglarizing celebrity homes can be known as "booked."

Tamayo, Neiers, Lopez and Ames have been added to an amended felony complaint that initially charged 18-year-old Nicholas Prugo with two counts of first-degree residential burglary at the homes of Lindsay Lohan and Audrina Patridge.

The group allegedly is behind a crime spree that "netted the suspects more than $3 million in jewelry, designer clothes and accessories" from the homes of Paris Hilton, Orlando Bloom, Megan Fox, Lohan and Partridge, among others, according to Axelsen.

He has now been charged with an additional five counts of first-degree residential burglary, including the burglary at a noncelebrity residence in the Hollywood Hills area of Los Angeles, California, and is scheduled to be arraigned November 12.

A fifth suspect, Rachel Lee, was arrested in Las Vegas, Nevada, last week but has yet to be charged, pending further investigation.

Neiers has denied any wrongdoing through her attorney, according to reports. The 18-year-old is shooting an E! Network reality show with her family, including her sister Tess Taylor, a Playboy model.

It's really kind of a perfect storm of technology and this unusual, perverted celebrity worship.
--Brett Goodkin, LAPD
RELATED TOPICS

"Shooting began several days ago [on the pilot] and will continue for the next few weeks," E! told CNN. "We are concerned by recent events, awaiting further details and will be monitoring the situation closely."

Prugo's attorney told CNN that his client's involvement was limited in comparison with the other suspects. Attempts to reach Lee, Tamayo, Lopez and Ames were unsuccessful.

While charges have been filed against those five, "as each day goes on, additional information is uncovered; we're still actively investigating this case," Los Angeles Police Department Officer Brett Goodkin said.

One connection police are looking into, Goodkin says, is the group's link to Jonathan Ajar, a 27-year-old ex-con and club promoter suspected of selling the stolen merchandise, according to police. A significant numbers of items are still missing, they say.

"At this point, we know Ajar is connected to it," said Goodkin. "A search warrant was served at his home and a warrant has been issued for his arrest for selling and possession of multiple firearms and possession of and sales of various sorts of narcotics."

Authorities believe an obsession with celebrity culture could be the motivation for these crimes.

"It's really kind of a perfect storm of technology and this unusual, perverted celebrity worship," Goodkin said. "There's every indication that these kids dug the idea that they were in celebrities' homes, and by proxy they were part of that life now. In all accounts, they were, on a daily basis, wearing celebrity clothing that everyone knew they didn't buy at the Gap."

The group targeted celebrities such as Rachel Bilson, Goodkin said, because it was known she had a large collection of Chanel. They allegedly studied celebrity magazines to pick out the clothing and jewelry that they wanted, and would then use the Internet to study satellite maps of the victim's home before deciding on the best method for entry.

All of the burglaries took place between December 2008 and October 11, Axelsen said.

At first, police treated them as separate incidents, but after reviewing surveillance video from Patridge and Lohan's homes, they began to notice several similarities and realized that the incidents were related.

"There's nothing to suggest that these kids were criminal masterminds -- this wasn't an 'Ocean's 11' caper," Goodkin said. "It's really a series of quite run-of-the-mill residential burglaries, except they targeted the victims for who they are."