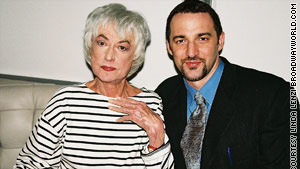 The actress, who died in April, included a $300,000 donation to New York's Ali Forney Center, an organization supporting homeless LGBT youth, in her will, leaving center Executive Director Carl Siciliano overwhelmed by her kindness.

Siciliano said he knew of Arthur's plan to include the center in her will, but never knew the amount.

He had been struggling to keep the doors of the shelter open. The organization assists more than 1,000 people each year, providing shelter for those who had to leave home "for being who they are," Siciliano said.

"The last year and a half, since the economic crisis started, it's been really hard to keep this program going," Siciliano said. "A lot of the foundation and corporate money that we used to get has dried up, and we've been growing. Every day, we have about 125 kids a night waiting to get into our housing."

But on Tuesday morning, a FedEx carrier delivered a $300,000 check.

Siciliano said he immediately started to cry. Arthur's donation couldn't have come at a better time.

"For months, I've been really sweating to make each payroll, and we're usually a month or two behind on our rent, and there have been times when I was afraid that I wasn't going to hold it together," he said. "That kind of terror of [trying to] keep this thing going has come to an end for now with this extraordinary generosity."

Arthur's relationship with the center goes back to 2005, when the stage and screen star agreed to do a benefit at the request of a former set designer to help ease the center's growing pains.

"At that time we were a really small, grassroots organization. We were only sheltering 12 kids at a time," Siciliano said.

The amazing thing, he added, is that Arthur "didn't realize at that point what a serious issue it was, that so many thousands of gay kids were on the streets of our country."

Nevertheless, she was on board. She flew to New York to reprise her one-woman show, "Bea Arthur on Broadway: Just Between Friends" for one night only, raising more than $40,000 for the organization and contributing another sizeable personal donation.

But her generosity didn't stop once the curtain fell. Arthur consistently raised the issue of LGBT homeless youth in press interviews, such as her November 2005 interview with Next magazine.

"I'm very, very involved in charities involving youth," Arthur said in the interview. "These kids at the Ali Forney Center are literally dumped by their families because of the fact that they are lesbian, gay or transgender -- this organization really is saving lives."

With Arthur's donation, Siciliano hopes he can save a few more. Part of the $300,000 will go toward buying a residence that can house 12, and Siciliano plans on naming it after the woman who helped make it happen.

"To have her choose to shine that kind of light on us was remarkable," Siciliano said. "She became an advocate for the issue; she said she would do anything that she could to help these kids."