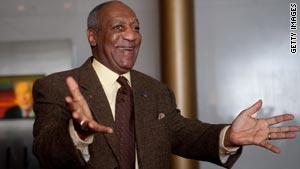 Washington (CNN) -- Comedian Bill Cosby received the Mark Twain Prize for American Humor on Monday after refusing to accept the award twice in the past.

Cosby, known for his clean acts that do not include profanity, declined the previous prizes because he was turned off by language used at the first Mark Twain Prize ceremony in 1998 honoring the late comedian Richard Pryor.

"I made it clear that there were certain people who misunderstood what Richard was about and how they were using words, "Cosby said. 'And I was not about to have that celebrating Mark Twain and Bill Cosby."

Cosby accepted this year after the Kennedy Center promised not to repeat "the foolishness at Richard Pryor's celebration," Cosby said.

Stars including comedians Chris Rock and Jerry Seinfeld, musicians Willie Nelson and Wynton Marsalis and "The Cosby Show" co-stars Phylicia Rashad and Malcolm-Jamal Warner helped honor Cosby during the ceremony at the John F. Kennedy Center for the Performing Arts.

Comedian Sinbad, who is also known for his clean comedy acts, said Cosby showed him that comedy without foul language could still have "bite."

"[Bill] Cosby showed me that a person could be clean and make money and be effective," Sinbad said.

"Bill Cosby is one of the greatest comedians this country has ever produced," said comedian Carl Reiner, a past Mark Twain Prize recipient.

Cosby's career spans more than four decades. He started out performing stand-up comedy in small clubs in Greenwich Village in New York. He eventually landed a pivotal co-starring role in the 1960s television series "I Spy."

One of his best-known roles was as Dr. Heathcliff Huxtable on the 1980s sitcom "The Cosby Show" The show portrayed an upper-middle-class African-American family and is credited with helping revive NBC's fortunes and for blazing a path for other shows featuring African-Americans.

"How far I could go had barriers in front of it. And it is because of civil rights, because of the winning of the people of all color ... we're here today," Cosby said.

"I just feel like a master. I feel good. And I'm comfortable."

The Mark Twain Prize for American Humor is awarded to performers who use comedy to influence American society. Past recipients include George Carlin, Billy Crystal, Steve Martin and Whoopi Goldberg.

The event is scheduled to air on PBS on November 4.