(CNN) -- Jon and Kate Gosselin aren't the only ones conferencing with lawyers. TLC, the network that introduced the bickering couple and their eight kids to the nation, has not only put the kibosh on "Jon & Kate Plus 8" but also filed a breach of contract lawsuit Friday against Jon Gosselin. 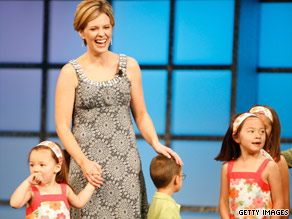 Kate Gosselin's life as a single mom was supposed to be the focus of TLC's new series "Kate Plus 8."

It's doubtful anyone is surprised that TLC is cutting "Jon & Kate Plus 8" from its programming.

After 10 years of marriage, the couple announced their separation and divorce filing on a special one-hour episode of their reality show in June.

A show insider told CNN on Thursday there's enough "Jon & Kate" footage to last until mid- to late November, but the program will be off the air after then.

TLC would like to be able to replace "Jon & Kate" with the renamed series "Kate Plus 8," but the network will have to get past Jon Gosselin first.

The network announced in September that "given the recent changes in the family dynamics, it only makes sense for us to refresh and recalibrate the program to keep pace with the family," said TLC President Eileen O'Neill. In other words: less Jon and more Kate.

TLC's "deeper focus on Kate's role in the family and her journey as a single mother" apparently didn't go over well with Jon. Days after learning about the network's new show, the father of eight barred TLC from continuing production on his Wernersville, Pennsylvania, property, citing concern for his children and effectively pulling the plug on his wife's solo spotlight.

"Kate Plus 8" was expected to debut November 2, but according to a complaint TLC filed Friday in Montgomery County, Maryland, Circuit Court, "Kate Plus 8" is "suspended indefinitely."

In its lawsuit, TLC alleges Jon Gosselin has violated his contract with paid and unpaid TV appearances he recently has made. The network claims it has lost more than $30,000 as a result of Gosselin's alleged disregard of his contractual obligations.

In a statement provided to CNN, Mark Heller, Jon Gosselin's attorney, said that neither he nor his client have been served any documents; Heller said he read the complaint on the Internet.

"Apparently, TLC has elected to initially litigate this case in the court of public opinion .... because neither Jon nor I have been served with legal pleadings or informed by TLC of the instant litigation," Heller wrote in the statement, calling TLC's claims "weak, feeble and baseless."

"Discovery and TLC has treated Jon Gosselin like a dog by attempting to keep him on a leash and muzzle him and deny the father of eight the opportunity to earn a livelihood to support his family," Heller wrote in the statement.

TLC's complaint said both Gosselins agreed to a contract before the fourth season of "Jon & Kate" in April 2008 in which their per-episode compensation "substantially increased."

In addition, Jon Gosselin agreed to provide "his and his family's services in taping and promoting the program in and around the family home and to provide those services exclusively" to TLC, behave in an "appropriate" manner and not "promote or endorse any products or services," according to the complaint.

Jon has also "entered a lucrative agreement with 'Entertainment Tonight' and its companion show, 'The Insider' to discuss his family and the problems he was having with Mrs. Gosselin," according to TLC's complaint.

TLC also alleges that Jon has "sold photographic rights to numerous media outlets" and "has accepted payments to endorse products and services," such as a pool party hosting gig in August at the MGM Grand Casino in Las Vegas, Nevada.

In his statement, attorney Heller said the contract will be "unenforceable" because the Gosselins entered into the agreement without legal representation. "In any event," the statement added, "when TLC and Discovery ended the program 'Jon & Kate Plus 8' they also effectively terminated the purported contract."

Heller said that Jon will "vigorously defend against the baseless action."

It's unclear when either of the Gosselins will return to television after "Jon & Kate" becomes part of reality TV history.

Jon, however, appears optimistic. The 32-year-old told "Entertainment Tonight" this week that "he's not worried about future employment" and plans to continue his television career.