A&E waffles on whether Jackson kids are in reality show

LOS ANGELES, California (CNN) -- The A&E network quickly backed away from an earlier assurance that Michael Jackson's three children "are not part of" a reality show it is taping with four of the pop star's brothers. 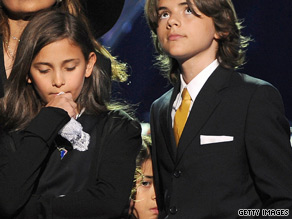 Before their father's death, Michael Jackson's children, Paris, Prince and "Blanket" were not often seen in public.

The network said late Wednesday it was "entirely possible" that "other members of the Jackson family" could appear on the show, but it is too soon to know.

US Weekly magazine quoted an unidentified source as saying that despite a sharp division in the Jackson family over the matter, Prince, 12, Paris, 11, and Blanket, 7, would be included in the show.

"The Jacksons: A Family Dynasty," which focuses on the lives of four of the Jackson brothers -- Jackie, Jermaine, Tito and Marlon -- was in the works before the singer's June 25 death.

"Filming is taking place right now," A&E said in the late Wednesday statement. "As production moves forward, it is entirely possible that the brothers' paths will intersect with other members of the Jackson family, who may or may not be included in the finished series. However, we cannot at this point definitively know who else may make an appearance in the series."

Earlier Wednesday, however, the network had seemed to rule out their appearance, saying, "They are not part of the series."

Jackson went to great lengths for years to keep his children out of the public eye, including covering their faces with masks and scarves.

It was only at the public memorial service for Jackson that the world got a close look at them -- and began learning about their personalities.

The magazine's source is quoted as saying that the oldest Jackson sister, Rebbie, "feels Michael would spin in his grave if he knew his kids would be on this show."

The public relations firm hired by the Jackson family soon after Michael Jackson's death issued a short statement Wednesday morning that did not dispute the US Weekly report.

"We are not going to comment," the statement said.

The reality show is tentatively set to begin airing in December.