(CNN) -- "Saturday Night Live" was formed in the crucible of the mid-1970s, when Watergate brought respect for politicians to all-time lows, the counterculture was taking over comedy, and many television viewers were seeking out something fresh and bold. 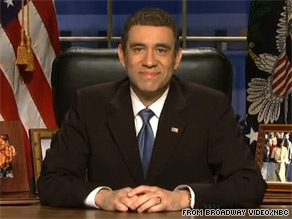 It was a powerful combination -- and after 34 years, the combination of "SNL" and politics can still strike sparks among political observers.

The most recent example came this past weekend when Fred Armisen, as President Obama, chided "those on the right" for saying that he was "turning this great country into something that resembles the Soviet Union or Nazi Germany."

Not true, said Armisen as Obama.

Watch the sketch -- and the reaction »

The sketch has caused a rumble among the inside-the-Beltway chattering classes and New York news nabobs. Wrote Washington Post blogger Jonathan Capehart, "When your 'friends' start talking about you like this -- and friends with a huge megaphone and a feel for the national mood -- the White House should listen."

"Humor with some truth in it is always dangerous. Make no mistake, a drumbeat of belittlement can damage a president," added CNN political contributor Ed Rollins in a column.

The White House had no comment when asked about the sketch by CNN.

"I think 'SNL's' role is, the moment they're in power, we're the opposition," he told CNN's Alina Cho last year. "We're not partisan. We're not, you know, we're not putting on anything that we don't believe is funny."

Video gallery: "SNL" takes on presidents through the years »

The recent sketch is indicative of the end of Obama's honeymoon, Syracuse University pop culture professor Robert Thompson says, but he doesn't want to read more into it than that.

"Comedy is about going after the people in power," he said.

The president has also taken recent shots from "The Daily Show" and "Real Time with Bill Maher." "What this says is that the comedy-industrial complex has turned its sights on the reigning president of the United States," he said.

But, he added, "I wouldn't put this into the meme category," referring to concepts that travel so quickly they take on a life of their own, such as Tina Fey's Sarah Palin sketches from last year. "The [Obama] sketch wasn't that funny."

Indeed, the show's overall impact is often mixed, observes Slate columnist and Rutgers media studies professor David Greenberg. It can "capture or intensify" a storyline that's being passed through the news media, but the show is more a barometer that can change with events.

"It's not incapable of influencing things," he said, noting the show's slash-and-burn '70s satire and Fey's Palin parody. "But since the early '80s, those moments are pretty rare. ... You'll see good impersonations but not the underlying critique you had with, say, Dan Aykroyd as [Richard] Nixon."

Besides, he added, the Obama sketch may have titillated the politico-media crowd, but he wonders whether its impact went any wider.

Indeed, the ratings for the episode were a far cry from last year's Palin-fest -- from a 7.3 rating for the same week in 2008, to 4.7 -- and the Armisen sketch didn't get the frenzied online dispersion the Palin sketches did. iReport.com: 'SNL' won't hurt Obama

However, Obama should be concerned about one thing, observes Thompson.

In general, "SNL" mocked previous presidents' personal characteristics, such as Clinton's outsized appetites or George W. Bush's struggles with spoken English. With Obama -- who lacks the same kind of easily caricatured traits, Thompson says -- the show went after his record.