Jon Gosselin's epiphany: Reality TV not good for my kids

LOS ANGELES, California (CNN) -- After four years of "Jon & Kate Plus 8," Jon Gosselin said he's decided it's not healthy for his children to be on a reality show. 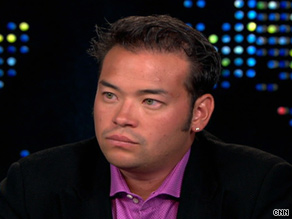 Jon Gosselin appears on "Larry King Live" Thursday. He said he doesn't want his kids to continue with TV show.

"The reason I don't think it's healthy for them is that we're going through a divorce right now, and I don't think it should be televised and I think my kids should be taken off the show," Gosselin told CNN's Larry King on Thursday night.

"They're 5 and 8 now; let them experience a normal childhood," he said.

His lawyer said the TLC reality series about the Gosselin family is dead because no judge would ever "subject the children to the show if the father believes it's detrimental."

Jon and Kate Gosselin announced their separation and divorce filing -- after 10 years of marriage -- on a special one-hour episode in June. They agreed to share custody of their 5-year-old sextuplets and 8-year-old twins.

"I had an epiphany one day," Gosselin told King. "I just looked in the mirror and I said, 'I don't want to be this person anymore.' I made mistakes. I know I messed up. I do regret a lot of things. But I have to learn from those mistakes and move forward."

He blamed some of his mistakes on his not having a lawyer when he and his wife signed the show contract four years ago.

"He had no manager, he had no lawyer, he had no idea what he was signing," said Mark J. Heller, the lawyer recently hired by Jon Gosselin.

"Now I have a sense of empowerment," Gosselin said. "Before, I didn't have any representation. I take blame for not being an initiator. I was an avoider. I was passive."

Kate Gosselin said she was "saddened and confused by Jon's public media statements."

"Jon has never expressed any concerns to me about our children being involved in the show and, in fact, is on the record as saying he believes the show benefits our children and was taping on Friday with the kids," she said.

She said her estranged husband only changed his mind about their eight children's involvement after TLC "announced the name change of the show and indicated that Jon would have a lesser role in the show."

"It appears that Jon's priority is Jon and his interests," Kate Gosselin said.

TLC announced Tuesday that it was retitling the show "Kate Plus 8" because of "recent changes in the family dynamics."

Jon Gosselin's lawyer said the network only fired him "before he fired the show."

The state labor department is investigating whether TLC violated child labor laws by not properly paying the children or getting permits for the past four seasons, Heller said.

"These kids have been working without compensation for four years," Heller said.

Gosselin revealed to King that the family was paid $22,500 per episode, with none of the money specifically designated for the eight children.

TLC, in a written statement Thursday, said it had halted "direct filming of the children" until Jon and Kate Gosselin have "further conversations."

The network said Jon Gosselin's "latest comments are grossly inaccurate, without merit and are clearly opportunistic," noting he and the family were taping as recently as last Friday.

"Despite Jon Gosselin's repeated self-destructive and unprofessional actions, he remains under an exclusive contract with TLC," the network said.

Heller said, however, the contract the Gosselins signed four years ago with TLC was "null and void" because the network dropped Jon Gosselin.

TLC gave King a written statement insisting the changes were allowed by the contract.

The new show will take "a deeper focus on Kate's role in the family and her journey as a single mother building the next chapter in her life," TLC said Tuesday. Jon Gosselin will still appear, "but on a less regular basis," it said.

Kate Gosselin's divorce lawyers told King that Jon Gosselin does not have the legal right to stop the children from appearing on the reality show because of the separation agreement the couple signed.

"He signed an agreement that party with physical custody will decide if they will be on taping," Mark Momjian said. "He must go to court to change that."

Jon Gosselin said his relationship with TLC began to deteriorate at the beginning of the year when network executives began calling him, warning him that he was in breach of his contract.

"They put me on house arrest" with bodyguards watching him around the clock, he said.

As for his relationship with Kate, he said she told him a year ago she wanted to lead a life separate from him.

He said he has not talked to Kate in almost a month, although he has tried calling and sending text messages.

"I want to work things out," he said. "We know we're not going to be husband and wife, but we will always be mom and dad. We have to get our kids off television."