Mackenzie Phillips: I had sex with musician dad John Phillips

(CNN) -- Actress Mackenzie Phillips reveals she had a long-term incestuous relationship with her famous father, musician John Philips, in a tell-all memoir, according to People.com, which obtained an advance copy of her book. 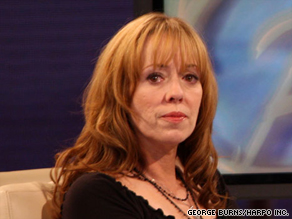 Phillips, the 49-year-old former child star and daughter of the Mamas and the Papas founder John Phillips, says she had sex with her father the night before she was to marry Jeff Sessler, a member of the Rolling Stones entourage, in 1979, according to People.com.

"On the eve of my wedding, my father showed up, determined to stop it," writes Phillips, who was 19 at the time and a heavy drug user, according to People.com. "I had tons of pills, and Dad had tons of everything too. Eventually I passed out on Dad's bed."

Phillips, best known as Julie Cooper on the sitcom "One Day at a Time," says the sexual relationship became consensual as her life began to spiral out of control.

During her time on the hit CBS comedy, which ran from 1975 to 1984, she battled drug addiction and underwent drug rehabilitation. She later was fired from the show in 1980 because of her drug abuse.

Eventually, she and her father went to rehab together and she later toured with him in a band called the New Mamas and the Papas, according to People.com.

"I was a fragment of a person, and my secret isolated me," she writes, according to People.com. "One night Dad said, 'We could just run away to a country where no one would look down on us. There are countries where this is an accepted practice. Maybe Fiji.' "

Phillips will reportedly unleash the secret she has kept to herself for 31 years in an interview on "The Oprah Winfrey Show" scheduled to air Wednesday. Phillips' book, "High on Arrival," comes out the same day.

The interview features Phillips discussing the time she spent hiding in her home, compulsively purchasing items from a television shopping channel as well as the events surrounding her arrest.

In a promotional clip for "The Oprah Winfrey Show," Phillips also says her father shot her up with drugs. John Phillips, who died in 2001, had a well-documented drug problem and was convicted of drug trafficking in 1981. He told many stories of his drug abuse in his memoir, "Papa John."

"One Day at a Time" co-star Valerie Bertinelli also appears on the Winfrey show in support of Phillips.