(OPRAH.com) -- He can saw himself in half, sing a selection of Broadway showtunes and swing on a flying trapeze. 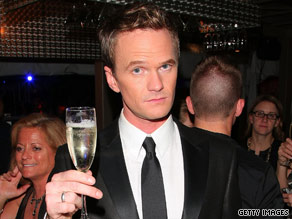 Neil Patrick Harris says he'll try to make viewers feel like they're in good hands with him as Emmy host.

When Neil Patrick Harris, one of the stars of the hit CBS sitcom "How I Met Your Mother," isn't dabbling in the extraordinary, well, he's probably hosting an awards show.

In the late '80s, Neil -- known as NPH to his fans -- landed the starring role on "Doogie Howser, M.D." After years of child stardom and teen heartthrob status, Neil left the small screen for the stage. He became a respected Broadway actor, starring in shows like "Rent," "Cabaret" and "Proof," before returning to television.

Now, millions know Neil as Barney Stinson, the womanizing, slap-happy sidekick on "How I Met Your Mother," which begins its fifth season September 21.

Like Billy Crystal and Johnny Carson before him, this man-of-many-talents is also making his mark as an awards show host. On Sunday, September 20, Neil will host the 61st Primetime Emmy Awards. He shares his thoughts on fate, finding balance and making out with his co-star.

Kari Forsee: How are you preparing for Emmy night?

Neil Patrick Harris: I'm just trying to make sure all the comedy host elements are in place. We'll have a good opening bit and a couple surprise things throughout. We want to balance respecting the show and the doling out of the awards with the sort of random things that will keep the audience's attention in other ways. So that's kind of been my job. You want to make it unique and, yet, classic. That's a tricky dynamic. Oprah.com: Planning an Emmys party? Get 4 entertaining solutions

KF: I can imagine. How often are you rehearsing?

NPH: Well, it's sort of a litany of e-mails and phone calls all day with the producers. We had a great opening short film we are going to shoot, and it would be the first thing you shot. That was going to be with Alec Baldwin, and he withdrew at the last minute. So that got scrapped, and we're off to plan D, E or F. It's sort of like now you go: "That's fantastic, great. We've got that person," or "Oh, that person didn't work. Now what do we do?" A lot of "now what do we do?" questions.

KF: Now at the Tony Awards, you sang a, may I say, legendary closing number. Will you be singing at the Emmys, or is dancing more the focus?

NPH: I suspect you won't see me dancing very much. That's not my forte. But yeah, I might throw some sort of singing into it. I haven't quite decided. I sort of feel like the Emmys are so classy and glamorous and black tie, the host really needs to respect his job title. I think too much "Look at me! Look at me!" as the host of a show that big is counterproductive. So long as I make you feel confident that you're in good hands with me as the host, then it's my real responsibility to introduce you to a lot of other people and elements -- other presenters who are then going to talk to you or other introductions of next sections. That's my role. It's not really to be a song-and-dance man.

KF: Did you look back at past Emmy hosts for inspiration?

NPH: Very much. Steve Allen hosted the first televised awards, which was the 7th Annual Emmy Awards, in, I think, 1955, and he was great. That was sort of my inspiration for all of this. He just had such a dry wit, a commanding voice, a great presence. You knew when you were watching it that if something went wrong, you could look to him, and he would steer you through it. It was always with great dignity and a dry sense of humor, and he was sort of out there all the time. He was definitely the "host." He definitely helped the show, so I like that. Johnny Carson, too, was great.

KF: Hypothetically, what would you do if your name was called for Outstanding Supporting Actor in a Comedy Series this year?

NPH: Oh my, I would graciously accept, try to keep my speech to a minimum, and then quickly set it backstage, because I have a lot more to do for the next couple hours.

KF: Is the award given out early on in the show?

NPH: I think it will be within the first hour. It's a nice and refreshing win-win for me, because if I do happen to win, it will be awesome-tastic, and oddly, a bit of a distraction. And if I don't win, it just provides lots of comedy fodder for the rest of the show. So I'm pretty safe either way. It's a tough category, for sure.

KF: So the day after the Emmys, a new season of "How I Met Your Mother" premieres. Last season's finale left us wondering if your character, Barney Stinson, will finally settle down and start dating Robin Scherbatsky.

NPH: They certainly take a stab at it. I know there will be lots of necking and making out. Lots of canoodling between Robin and I. My lips are chapped. They have strong physical chemistry, apparently.

KF: "How I Met Your Mother" puts a lot of stake in fate. Are you a believer in fate?

NPH: I don't know what to make of fate. I certainly don't think you can predetermine things. It feels like if you go out of your way to try to make something happen, it rarely does. But if you allow for good things to happen, they seem to. I think a lot of that is more perception, you know? A lot of people would take getting rear-ended in their car as an example of why their life continues to be one road block after another, and I think a different person can see that same fender bender and be grateful it wasn't worse. That allows them an opportunity to learn something from it -- sort of take some sort of positive elements from that. I think if you try to angle your life in those ways, then fate, destiny, karma opens itself up to you and allows for more growth. Oprah.com: How to get lucky in love and life

KF: I'm curious, how did your father meet your mother?

NPH: They were college, fraternity and sorority sweethearts. This was in Albuquerque. She was in Alpha Chi Omega. And he was in, something Pi? They did the whole, you know, he gave her his pin. She was pinned, and they were a couple. Then, they were married, and they've only been with each other. I'm very extraordinarily lucky with my parents. ... We didn't have a lot of money growing up, but we were never made to feel poor. They had amazing senses of humor, senses of music and really treated us like regular people when we were kids. So I lucked out.

KF: Did your parents help you survive child stardom?

NPH: They were definitely grounding forces during years in my life that were very tumultuous. They're remarkably grounded and were not at all blinded by the light of stardom and fame. Their main concern was just my well-being and my brother's well-being during all of our crazy times, whether they be intimate or very public. They're remarkable people. Oprah.com: Get your fall TV premiere guide!