DeLay injured during 'Dancing With the Stars' rehearsal 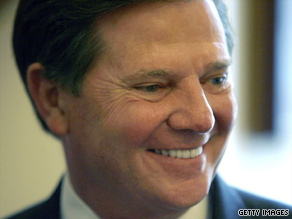 Tom DeLay says it will take more than a foot injury to keep him off "Dancing With the Stars."

"Old age is catching up to me, may have a stress fracture in my foot," DeLay wrote Tuesday on Twitter. "no worries, it'll take more than that to keep me off the dance floor!"

DeLay later informed his Twitter followers that his condition is "a pre-stress fracture. I live for another day."

According to People magazine, DeLay is having his foot examined in Los Angeles, California. Doctors will determine if he can continue on the show.

DeLay is partnered with Cheryl Burke, who has won two championships on the show.

The show's new season is slated to debut September 21.

All About Tom DeLay • Dancing with the Stars