Kate Gosselin mum about Jon on 'The View'

(CNN) -- Whatever Kate Gosselin may feel about her estranged husband, Jon, telling ABC News that he "despises" her, the star of "Jon & Kate Plus 8" chose not to reveal it on Monday morning's "The View." 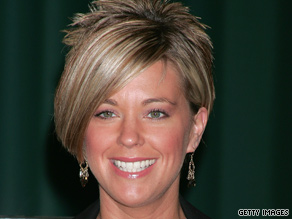 Kate Gosselin made the first of her two guest co-host appearances on "The View" this morning.

Filling in for regular "View" host Elisabeth Hasselbeck, Kate Gosselin chimed in on everything from public meltdowns to the Duggar family's new pregnancy, but she stayed mum on Jon Gosselin's recent interview.

On the first of two "View" appearances, Gosselin sympathized with tennis star Serena Williams' outburst at the U.S. Open tennis tournament over the weekend.

"When you're in the public eye, you're held to a higher standard, but you do melt down because you're human," Gosselin said, acknowledging a lesson she's learned as her marriage of 10 years has come to a very public end.

Yet despite the amount of publicity her split has received, Gosselin said she has no plans to cease production of "Jon & Kate Plus 8."

"I could stop [the show,] and I'll still have all of the flak and the lack of the paycheck," she explained to her co-hosts. "I'm a single mother. I, now more than ever, have to be out there working. My focus is supporting my children."

"We didn't go into this trying to be huge celebrities," she said. "Season one to season five is a totally different world. TLC has never had a show like ours, and you're going into it saying, 'It's a great thing.' "

That "great thing" has turned visibly sour of late, as Gosselin's soon-to-be ex-husband has been seen out and about with girlfriend Hailey Glassman, whom he's claimed to love more than his wife.

While the other co-hosts avoided the topic, Sherri Shepherd pointedly asked Gosselin, "How do you handle him bringing that girl around your children?"

The mother of eight responded without hesitation, telling her co-hosts: "I'm not going to lie: This is all difficult. I melted down over the weekend in the privacy of my own home."

But, Gosselin added, "for the sake of my children, I'll continue taking the high road."

Kate Gosselin is slated for a second guest co-host appearance on "The View" on Tuesday.