LOS ANGELES, California (CNN) -- Jay Leno says immediacy is key to his new show, and he should have plenty of it for his prime time premiere Monday, when Kanye West is a musical guest. 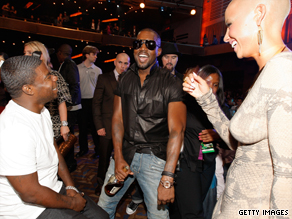 Leno could reprise his 1995 ratings-grabbing moment when he asked actor Hugh Grant, "What the hell were you thinking?" Grant had been arrested two weeks earlier for public lewd conduct with a Hollywood hooker.

West placed a written apology on his Web site -- "I'm sooooo sorry" -- but "The Jay Leno Show" could be the place and time for a more personal and public mea culpa.

Watch the details on West's appearance »

Leno's publicist confirmed Monday that West was still booked for the NBC show, which tapes just three hours before it airs in the eastern United States at 10 p.m.

West was booked by Leno weeks ago to perform with two other hip-hop superstars: Rihanna and Jay-Z.

Some drama may center around how West and Jay-Z get along onstage. Jay-Z's wife, singer Beyonce Knowles, was perhaps the most embarrassed by his outburst.

Swift, a 19-year-old country-pop singer, was in the midst of her acceptance speech for the Best Female Video award when West rushed onstage and took her microphone. He then let loose an outburst on behalf of Beyonce, who was one of several artists who lost out to Swift.

Although Beyonce appeared stunned as she watched from the front row, she gracefully recovered near the end of the show, when she was onstage to accept an award of her own.

"I remember being 17 years old, up for my first MTV award with Destiny's Child, and it was one of the most exciting moments of my life," she said, referring to the girl group with which she had her start. "So I would like for Taylor to come out and have her moment."

MTV said the West-Swift incident was not planned, a point it had to stress after a walkout by singer Eminem at last year's event turned out to be staged.

Staged or not, apologies from celebrities behaving badly have been good for Leno's ratings.

West, Rihanna and Jay-Z will debut Leno's new approach to musical guests. They will be limited to one song, and most nights they'll share the stage with other stars.