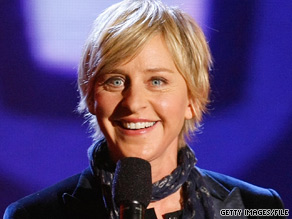 Talk show host Ellen DeGeneres brings years of experience in front of a live audience to her role.

"I'm thrilled to be the new judge on American Idol," DeGeneres said Wednesday. "I've watched since the beginning, and I've always been a huge fan. So getting this job is a dream come true, and think of all the money I'll save from not having to text in my vote."

The popular comedian and entertainer will fill a seat left vacant by Paula Abdul, who announced she was leaving the show in August after eight seasons. Was DeGeneres the right replacement?

DeGeneres will sit alongside Simon Cowell, Randy Jackson and Kara DioGuardi after auditions are completed for the popular talent show, which starts in January. Until then, guest judges including Mary J. Blige, Kristin Chenoweth, Joe Jonas and Neil Patrick Harris will fill the empty slot, Fox said.

Watch Jackson discuss what DeGeneres brings to the show »

"We are thrilled to have Ellen DeGeneres join the "American Idol" judges' table this season. She is truly one of America's funniest people and a fantastic performer who understands what it's like to stand up in front of audiences and entertain them every day," said Mike Darnell, president of Alternative Entertainment for Fox.

"We feel that her vast entertainment experience, combined with her quick wit and passion for music, will add a fresh new energy to the show."

DeGeneres brings years of experience in front of a live audience as the host of "The Ellen DeGeneres Show," now in its seventh season, and the host of the 79th Annual Academy Awards.

In her new role, the Emmy Award-winning talk show host faces the task of winning over Abdul's supporters, who lamented that her departure would irreparably alter the show.

The singer-dancer turned "Idol" judge was known for her positive comments to the singers participating in the shows. She was also known for her on-camera run-ins with Cowell and other judges in the show.

"With sadness in my heart, I've decided not to return to Idol. I'll miss nurturing all the new talent, but most of all being a part of a show that I helped from day 1 become an international phenomenon," a statement on Abdul's verified Twitter account said last month.