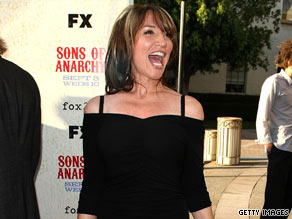 Katey Sagal says being a mother has been her greatest teacher -- for all her roles.

While her infamous alter ego was uneducated, Katey is thoughtful and well-spoken; Peg's fashion is time-warped (hello, bouffant!), Katey's is earthy; for every ounce of laziness in Peg's body, Katey has a multitasking one to match.

It may have taken years for the actress to shake her TV counterpart, but watch Katey as fierce matriarch Gemma Morrow on FX's motorcycle drama "Sons of Anarchy" (which was released on DVD Tuesday), and you'll start to wonder, "Peg who?"

Rachel Bertsche: You're known for playing three very different mothers -- "Married with Children's" Peg Bundy, Kate from "8 Simple Rules" and now Gemma. Plus, you have three kids of your own, two teenagers and a 2 1/2-year-old. Given all that on- and off-screen mothering experience, is there any universal quality that you would say all moms have?

Katey Sagal: Being a mother has been my greatest teacher and also the most self-sacrificing thing I've ever done. I've never loved anybody the way I love my children.

It's an experience I was surprised by. You have your boyfriend, your husband, your friends, but it's a different thing. It's deeper, and it's a fantastic -- and risky -- commitment to love that deeply.

I think the characters I've played all have that quality, even Peg Bundy. She was devoted and loyal to her children in her own wacky way. But Gemma is intensely dedicated to her family and would do anything to protect her son and her extended family, which is the club. In my personal life, I don't know that I would go to the lengths for my kids that Gemma does, but close.

Bertsche: You were Peg Bundy before you were actually a mom. Once you had your first child, id having firsthand experience change the way you played her?

Sagal: Well, I've always been a maternal type, but yes, everything was different once I had kids. Your whole perspective on the world changes -- I love how I wasn't so self-obsessed anymore! I can't say my characterizations of Peggy necessarily changed much. I just understood more what I was doing.

Bertsche: You mentioned your husband, Kurt Sutter, who is also the creator of your show. What's it like to mix family with business?

Sagal: Most of the time it's super great. There are moments when it's not, of course, but most of the time it's nice because we actually get to see each other. His job is intense, so he doesn't get a day like I have today where he can stay home from work. When I'm there, we can sometimes have lunch together, stuff like that. The hard part gets to be like "OK, maybe we should talk about something else." It becomes the constant topic of conversation, the show and the kids, and we have to make a conscious effort to say, "Let's not talk about it tonight."

Bertsche: People used to say that women of "a certain age" -- over 40 -- couldn't find any roles in Hollywood. That's certainly not true anymore, especially on cable, and you might be playing one of the toughest women out there. Why do think that has changed?

Sagal: I don't know why it's changed, but I'm really grateful it has. Maybe it has to do with the fact that we're all living longer and suddenly it's okay to get older. Maybe there's a broader audience for these characters. The stories you can tell about older women are deeper.

Plus, cable has opened up enormous possibilities. In feature films, you're still lucky if you're not the girlfriend or the wife. But I just read yesterday that Dianne Keaton is going to be on television now, she's doing a series with HBO, so TV is where our stories are being told.

Bertsche: Gemma's a pretty controversial character. How do you feel about her?

Sagal: I really like her. I like that she's flawed but she doesn't think that she is. She's survived a lot, and people like that tend to live in a lot of denial. She knows how to get through life in her way, and she doesn't question it. It's just, "This is how it is." For instance, I don't think Gemma's ever been to therapy. She's not that girl. What you see is what you get.

Bertsche: What's on tap for her this season?

Sagal: Something very dark happens. The club is going to go through some turmoil -- when you live an outlaw lifestyle, that's the risk you take. As my husband says, this season is all about loyalties. Henry Rollins and Adam Arkin are on the show this year, and they ... well, I don't want to say too much, but they're not really good guys.

Bertsche: I promised a co-worker I'd ask you about "Lost." She's dying to know if your character, Helen, is really dead. Even though we saw the grave, she doesn't believe it's the full story. Got anything on that?

Sagal: I was just reading an article this morning at the gym about how they were going to bring back people who were dead on "Lost," and they didn't mention me! Nobody tells me anything. I'm always thinking that Helen should come back and show up on the island, but as of today, no one's sent me a plane ticket to Hawaii. So I don't think it's going to happen, but I don't know. They're very close to the chest with all that stuff. Oprah.com: Get up close with all the hottest celebrities!