(CNN) -- Simon Cowell and the other judges on "American Idol" will not have Paula Abdul to kick around anymore. 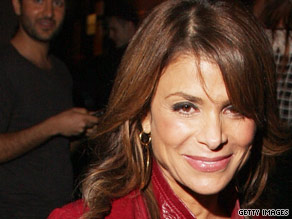 Paula Abdul announced late Monday on her official Twitter page that she will not return to 'American Idol.'

Abdul announced late Tuesday night on her official Twitter page that she will not be returning to the highly popular show.

"With sadness in my heart, I've decided not to return to IDOL. I'll miss nurturing all the new talent, but most of all being a part of a show that I helped from day 1 become an international phenomenon," the statement said on Abdul's verified Twitter account.

A statement from Fox and the companies that produce the show verified that Abdul was leaving.

"Paula Abdul has been an important part of the 'American Idol' family over the last eight seasons and we are saddened that she has decided not to return to the show," the statement said. "While Paula will not be continuing with us, she's a tremendous talent and we wish her the best." Blog: "Idol" won't be the same without Paula

Fans had been posting comments on social network sites for over a week wondering whether Abdul was going to return to the show.

Abdul's new manager, David Sonenberg, was quoted by the Los Angeles Times last month saying "Very sadly, it does not appear that she's going to be back on 'Idol.' "

Sonenberg told the newspaper it was "unnecessarily hurtful" to Abdul that they have not received "any proposal whatsoever" from producers even though the judges will start auditioning contestants for the next season on August 6.

Abdul, singer-dancer turned "Idol" judge, was known for her positive nurturing comments to the singers participating in the shows. She was also known for her on-camera run-ins with Cowell and other judges in the show.

All About American Idol • Paula Abdul