'Three Sheets' host will drink (and eat) anything 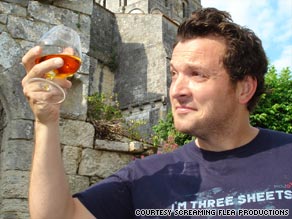 Zane Lamprey raises a toast to alcoholic beverages the world over.

Well, these are just some of the unusual items Zane Lamprey has eaten -- yes, eaten -- during the course of his day job.

No, he's not a human garbage disposal. Lamprey is a comedian who hosts a TV program about drinking, "Three Sheets." The show follows him all over the world as he samples local libations.

Lamprey also claims to be in search of the ultimate hangover cure, which is why he's often called upon to ingest the indigestible.

Not that the drinks are any better. Anyone for a shot of Belize rum that's had a dead snake fermenting in it for about a year? If the locals drink it, so will Lamprey.

"I'll try anything once," he said, adding that "there's certainly a lot that I won't drink twice."

Gross stuff aside, Lamprey has what many consider to be a dream job. And although he occasionally gets a little bleary-eyed, the Californian maintains that it's not a show about getting inebriated.

"I drink to try new things, to learn about drinking cultures or new drinks," Lamprey said. "Sometimes levels of inebriation are the by-product of my job, but I'm certainly not going out looking to do that. If I did I think I'd be the wrong person for the job."

We caught up with Lamprey in New York's Bubble Lounge, where he was preparing (soberly, mind you) to use a sword to lop off the end of a champagne bottle, glass neck and all. It's a ritual he says started in the Napoleonic era as a way to celebrate victories at battle.

While Lamprey might not be as battle-scarred as Napoleon's men, he does have a victory to celebrate: "Three Sheets" has a new home after being put in limbo for several months after its original network went off the air.

The show now airs on the Fine Living Network, which has just popped the cork on "Three Sheets' " fourth season. New episodes air Monday nights at 10 p.m. ET and repeat throughout the week.

Besides demonstrating how one sabers champagne, Lamprey talked to CNN about dealing with thumping hangovers, staying in shape and other challenges of hosting a TV show about alcohol. The following is an edited version of the transcript.

CNN: Do you consider yourself a professional drinker?

CNN: By now you must have discovered a cure for a hangover.

Lamprey: There is no cure. Actually, there's two. Either don't drink, or don't stop. Once you break one of those, you get into trouble.

We've found remedies, things that'll make it a little easier. I've jumped in freezing water, I've done just about everything, and nothing has wiped out my hangover.

CNN: Where were you when you had your worst hangover?

Lamprey: Oddly enough, I was in a place that I was promised by several people I would not get a hangover: Champagne, France. They said if you drink good champagne, you can drink as much as you want, and you won't get a hangover. So I put it to the test, and the next day, I had the worst hangover yet. It was horrible. Oh. So bad.

CNN: In Iceland, you drank something called "Black Death," the same name given to the pandemic that nearly wiped out Europe centuries ago. Taste good?

Lamprey: I'm sure it tasted better than the plague, but not by much. It tasted like something that people shouldn't want to drink, like vodka mixed with black licorice and dirt. When I stepped off the plane, I was dying to try it. Then once I tried it, I was dying to drink something to get that taste out of my mouth.

CNN: You've said that one of the worst things you've had to drink was viper rum in Belize, which had a dead snake soaking in it. What does a snake taste like?

Lamprey: A dead snake tastes like what a dead snake smells like. When I actually had to smell the shot, which I was told not to do, I almost hurled. I managed to get it down, and I think I chased it with a piece of watermelon rolled in sugar.

CNN: What does your doctor say about the state of your liver?

Lamprey: I have one. It's sitting on my counter at home, and it's completely fine. ...

When I finished this last season, I did go and get a full checkup, and I'm completely fine.

CNN: How do you stay in shape while shooting "Three Sheets"?

Lamprey: I don't. Go look at a clip of me doing the show. I'm probably about 23 pounds heavier. I have taken my shirt off, and when I watch that sometimes I get a little, "Oh, God."

But that makes me an everyman. People want to see an everyman. They don't want to see some guy who's all put together, which clearly I'm not. I don't profess to know anything about booze. I learn it from the people that show me.

CNN: Do you find that generally everybody's attitude toward drinking is the same the world over?

Lamprey: Absolutely. Everyone drinks to enjoy themselves. Everyone goes out with their friends because they're looking to have a good time. That's the same everywhere.

CNN: You spend all this time in bars around the world ... your crew must be tempted to drink.

Lamprey: Tempted to drink? Fact: I cannot keep up with my crew.

CNN: So your camera operator has shot you drunk?

Lamprey: I would say yes.

CNN: That explains why sometimes you look blurry.