Summer TV shows not so hot for critics, bloggers

(CNN) -- Summer offers lots of things to do outdoors, which is good for the many television viewers who complain about the quality of programming then. 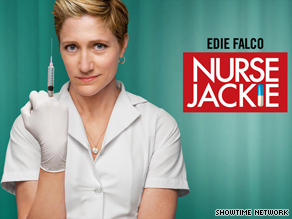 Showtime's "Nurse Jackie" is one of the cable series providing a lift for summertime television viewing.

It's not that there aren't things to watch.

On network television, there are plenty of repeats, reality shows and final episodes of series that have been canceled.

But summertime viewing on network television can be a wasteland, especially for bloggers and critics whose gig it is to write and report on TV, said Kath Skerry, founder and editor of the Give Me My Remote blog.

"It's borderline depressing," Skerry said. "Between the onslaught of reality television and what I call filler TV -- shows that the networks may have under contract but they just feel the need to get out regardless of the quality -- it almost feels like [the networks] have given up."

Variety, for many the bible of the entertainment industry, reported on the first four weeks of summer. It said viewership of ABC, NBC, CBS and Fox was down 9 percent, according to Nielsen.

The most quality she said she felt she has gotten out of network television this summer has been ABC burning off the final episodes of the canceled series "Pushing Daisies," "Eli Stone" and "Dirty Sexy Money."

Otherwise, Skerry said, the great shows are happening on the cable networks.

Joe Bua blogs at IAmATVJunkie.com and counts among some of his favorite summer shows HBO's "True Blood," "Torchwood Children of Earth" on BBC America and Showtime's "Nurse Jackie."

"Nurse Jackie" and other shows such as "Mad Men" are luring viewers who want original quality programs.

Fans are even showing up in big numbers for cable reality shows such as "Jon & Kate Plus 8" (currently on a break), and the "Real Housewives" franchise.

Bill Gorman, editor of the TV rating and analysis site TvByTheNumbers.com, said the shift to cable has been a long time coming.

"It's the continuation of a trend that's been going on since the early '80s," Gorman told AfterElton.com. "Viewers continue making the 30-year shift from watching broadcast to watching cable."

Jonathan Storm, a TV critic for The Philadelphia Inquirer, said the apparent ceding of summer to cable by broadcast networks is rooted in tradition and the history of how television started.

"The car manufacturers came out with their new models in September, and the TV people said, 'We will give you new shows to advertise your cars on,' " Storm. "That was part of it and that started in the 1950s."

Storm said there is also a type of "circadian rhythm" to television in that viewers are more inclined to tune in when the days are shorter and colder.

Broadcast networks once were able to afford 39 episodes a year, he said. Now economics often dictate a 22-episode season.

Storm said networks now trot out cheaper-to-produce reality shows -- something CBS hit the jackpot with several years ago after the runaway success of the summer-debuted "Survivor."

"The networks just couldn't afford to make shows all summer long," said Storm, who will soon join his colleagues for one of their summer highlights -- The Television Critics Association's summer tour in Pasadena, California.

"Now they've found the answer," Storm said. "They make all of these ridiculous Japanese game shows -- crash yourself into the red balls, 'Wipeout' show -- and several shows that come on and vanish before most TV critics and the general public even know they are there."

Ronnie Karam, senior editor at TVgasm.com, said he has been doing what a lot of viewers do during summertime -- checking out television shows on DVD that he hadn't watched during the fall season.

"I think that putting television shows on DVD has changed the way a lot of people are watching," he said. "During the summer, you feel like you are really scraping the bottom of the barrel."

Karam said it's a chance to check out critically acclaimed shows that viewers either didn't have the time for or the inclination to watch.

Broadcast networks really haven't figured out what their strategy should be for summer programming, said Jace Lacob, the writer/editor of Televisionary.

"Years ago, you had Fox launching scripted shows early in the summer and you had shows like 'The O.C.'," Lacob said. "You used to have 'American Idol' during the summer as well, which was huge for Fox. But [networks] really haven't gotten a grasp on their summer programming, so they are offering really random shows that nobody is really particularly interested in."

Lacob said some of the offerings have been a mixed bag, such as "The Listener," which didn't exactly catch fire, and "I'm A Celebrity Get Me Out of Here," which he believes wasn't as popular with viewers as NBC had hoped.

Blogger Kath Skerry said that even the publicity push around some of the shows such as "The Listener" and "The Philanthropist," which broadcast networks have premiered during the summer, has not at all rivaled the fall season.

"The promotion around them, I feel like the lack of enthusiasm with how the networks have communicated with bloggers feels very different," she said. "Whether it's true or not, from my standpoint it feels like the networks are not very enthusiastic about the shows."