(CNN) -- Alicia A.S. Duque knew she had some pounds to lose, but she had no idea how much being overweight affected her until the television cameras started rolling. 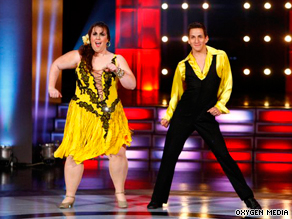 Alicia Duque performs with her partner on Oxygen's new hit "Dance Your Ass Off."

"Going into it, I knew it was a TV show, I knew it was a weight-loss show and I knew it was a dance show, but I didn't think I was going to learn so much about myself through the process," said the 23-year-old Duque, a contestant on the new show "Dance Your Ass Off." "I didn't know how many issues and problems I had with my weight until I faced it on the show."

Duque's struggle with weight loss is one of many on television that is resonating with those tuning into programming aimed at and featuring the plus-sized.

Style Network's "Ruby," NBC's "The Biggest Loser," Lifetime's "Drop Dead Diva" and Fox's forthcoming dating show "More to Love" all center on the overweight and are tapping into an audience that can relate to the desire to shed a few pounds.

Obesity has risen dramatically in the United States during the past 20 years, according to the Centers for Disease Control and Prevention.

And this year television has seen an increase in shows featuring participants and stars who look more like the viewing public.

Oxygen Channel's "Dance Your Ass Off" combines elements of ABC's "Dancing With The Stars" and NBC's "The Biggest Loser." Contestants learn dance routines for which they are judged before weighing in to determine how much they have lost.

Amy Introcaso-Davis, senior vice president of original programming and development at Oxygen, said dance and diet are two areas of interest for younger viewers of the channel, so combining the two made sense.

The 12 contestants, from the smallest to the largest, have struck a chord with viewers, she said.

"People find the contestants so relatable," she said. "We cast very purposely across the board in terms of how many pounds people needed to lose -- we had anywhere from people who needed to lose 40 [pounds] to over 150."

The premier of "Dance" rated highly for Oxygen, with more than 1 million viewers tuning in.

Oxygen also found success earlier with "Mo'Nique's F.A.T. Chance," a plus-size pageant where women of substance strutted their stuff to be crowned "Miss Fabulous And Thick."

For a nation grappling with obesity, Introcaso-Davis said, there is a hunger for such shows.

"If you have five pounds to lose or you have 150 pounds to lose, it's something you think about all day long," she said. "You take a bite of cheesecake and you think 'Should I be doing this?' "

Esther Rothblum, a professor of women's studies at San Diego State University and co-editor of the forthcoming anthology "The Fat Studies Reader," said she wonders if part of the appeal of plus-sized shows stems from the overweight being held up for public ridicule. The subject of her book is an emerging field that has been defined as "confronting and critiquing cultural constraints" against notions of "fatness" and "the fat body."

"Most people feel too fat in this country and are made to feel very unhappy with their bodies," she said. "So by portraying somebody who weighs so much more than they do, it's almost a way to make the audience feel like 'I could look worse' or 'At least I'm not them.' "

Ruby Gettinger said she supports any show that does not mock the overweight.

Her hit show "Ruby" started out as a documentary and has transformed Gettinger into a reality star who has lost more than 100 pounds and appeared on "Oprah."

"We are really all on this journey together, and I tell [viewers] that all of the time," said Gettinger, who at her heaviest weighed 716 pounds. "There are a lot of shows out there and I think people are trying to find a way to beat it and lose weight."

Gettinger, who is traveling around the country walking in various cities to inspire fans to become more active, said shows featuring the obese can really touch the audience if they are authentic.

"[My show] is the truth, not to say that the others aren't," she said. "When I started out on this journey and met with Style [Network, which airs the show] I said 'I have to keep my truth because this is about my journey and addiction and I want to deal with that because too many people are struggling.' "

Her show portrays her grappling with everything from temptation to embarrassment at having to visit the gynecologist, but Gettinger said it's all worth it if it inspires others.

Actress Marissa Jaret Winokur, who starred in the Broadway musical "Hairspray," said she agreed to host "Dance Your Ass Off" because she saw the potential for inspiration in viewers witnessing overweight people being active and feeling confident and sexy -- even in skimpy dance outfits.

Reality television has become so popular because viewers are attracted to watching real people, and there is a craving for viewers to see folks like themselves, she said.

"It became that so many people on reality shows were only beautiful skinny people, and I think a lot of people got sick of that," said Winokur, who has been blogging about her own struggles with weight for People magazine. "Really, who's home watching TV is the everyday person who is not a TV model. I think there is much more interest in watching people like yourself."