(CNN) -- Dr. Arnie Klein, dermatologist to the stars, had a long-term association with Michael Jackson. The professor of medicine and dermatology at UCLA was also Jackson's friend. 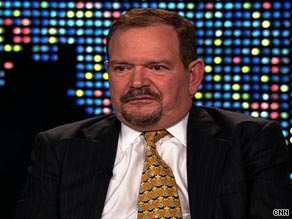 Some are speculating that Klein is also the biological father of Jackson's children.

In a wide-ranging interview with CNN's Larry King on Wednesday night, Klein addresses those allegations, along with issues such as Jackson's skin diseases, what he knew about Jackson's drug use, medications he prescribed, his thoughts on Debbie Rowe and much more.

Larry King: Doctor, how did you first meet Michael?

Dr. Arnie Klein, Michael Jackson's dermatologist: I met Michael because someone had brought him into my office. I took one look at him, and I said you have lupus erythematosus.

Klein: Lupus, yes. He had a red butterfly rash, and he also had severe crusting you could see on the scalp. ... So I then did a biopsy. I diagnosed lupus. And then our relationship went from there.

King: Let's fast forward. You saw him the Monday before he died. What was the purpose of the visit?

Klein: He came to me because, basically, I was sort of rebuilding his face, because he had severe acne and scarring. He had scarring from having a lot of cosmetic surgery. ... I was rebuilding his face so he looked much more normal. And contrary to what people said, he could not take off his nose. His nose was attached. But it looked too small.

King: Did he consult you when he was doing his plastic surgery?

Klein: No. I mean I came onto the scene long after he'd begun plastic surgery. In fact, what I wanted to do is stop it because I felt that we were losing body parts in the situation. ...

King: How would you describe Michael's mental, physical condition on that Monday?

Klein: He was dancing in the office. So he was in very good physical condition.

King: Do you know why he even started the plastic surgery?

Klein: I can't definitively say. But I know that people made fun -- or family members -- of the size of his nose. He was very sensitive to that.

King: Was Michael in any kind of pain when you saw him?

King: Did you see any evidence of needle marks on this visit?

King: Had you seen any in prior exams?

Klein: No, I never saw needle marks on his body.

King: Reports [were] he was emaciated.

Klein: He wasn't emaciated. I've worked with dancers many times, and dancers are very concerned about their weight. And so I knew that he always wanted to be thin. And I talked to him about eating enough and making sure he didn't over-exercise.

King: What was the strongest medication you gave him?

Klein: On occasion, [I] gave him Demerol to sedate him. And that was about the strongest medicine I ever used.

King: Did Michael have an addiction you were aware of?

Klein: Michael, at one time, had an addiction. And he went to England and he withdrew that addiction at a secure setting, where he went off of drugs altogether. And what I told Michael when I met him in this present situation when I was seeing him, that I had to keep reducing the dosage of what he was on, because he came to me with a huge tolerance level.

Klein: It's a wonderful drug when used correctly.

King: It is. And it's used by anesthesiologists. What would it be doing in someone's house?

Klein: I have no idea. And that's what doesn't make sense to me.

King: How would you buy Diprivan?

Klein: Well, you can get it from an anesthesiologist.

King: Did Michael tell you he used Diprivan?

Klein: I knew at one point that he was using Diprivan when he was on tour in Germany. And so he was using it, with an anesthesiologist, to go to sleep at night. And I told him he was absolutely insane. I said you have to understand that this drug, you can't repeatedly take.

King: How could a reasonable anesthesiologist give that to someone other than prior to surgery?

Klein: Because I have to tell you, there are certain people in this world who are not reasonable.

King: Are you surprised Diprivan was found in his home, supposedly?

Klein: I am very shocked by it.

King: Did you ever see any IV type equipment in his house?

King: What is vitiligo?

King: Did Michael have it?

King: Do black people have it more than white people?

Klein: No. But it's just more visible on black people, because they have dark skin.

King: How bad was his?

Klein: Oh, his was bad because he began to get a totally speckled look over his body.

King: So let's clear up something. He was not someone desirous of being white?

Klein: No. Michael was black. He was very proud of his black heritage. He changed the world for black people.

King: What you can tell us about his changing face?

Klein: When I met him, he had done a decent bit of surgery by then.

King: Did you ever say to Michael, we're going too far?

Klein: I stopped him from going to the surgeon because I said this isn't working anymore, you have to stop it. And what I spent the last part of the year doing is rebuilding a lot of things that I thought were done poorly.

King: Is it true that he wanted to look like Peter Pan?

Klein: I don't think he wanted to look like Peter Pan. I didn't see him implanting wings on the back of his back or doing anything like that, right?

King: All right, what about the nose?

Klein: The nose was a very special thing, because his father and his brothers supposedly, from what I've read, made fun of his nose all the time. So he was very sensitive to the nose. And...

King: What was wrong with his nose?

Klein: I originally didn't think there was much wrong with his nose. I thought he had a nice-looking nose. But it got to the point where it was far too thin. It didn't look natural to me.

King: Now, you helped him rebuild it?

Klein: I rebuilt it, yes.

King: Now, the Debbie Rowe part of the story. She was your nurse, right?

King: They met in your office?

King: Was that a real love affair?

Klein: I don't know what love is in that sense of the imagination. I think that she loves him very much. She admired him very much.

King: It was not a sexual relationship?

Klein: I think they did have sex.

Klein: Yes, I really do, [but] I can't guarantee that. I think they did have sex in their relationship.

King: You think Michael ever had sex to father the children?

Klein: I don't know that answer, because I would think that it's possible that he did. You can't guarantee that. You can only guarantee things you see.

King: Now, what about all the rumors about you and the fathering of those children?

King: That's not answering the question.

King: Well, you can say no.

Klein: I can say no, then. I will say no if that's what you want to hear.

King: No, I want to hear what you know.

King: So that means you donated sperm?

Klein: I once donated sperm. I don't know that you have to know...

King: You donated to him.

Klein: No, absolutely not.

King: Oh, you donated sperm to a sperm bank.

Klein: Once, to a sperm bank. But I don't think I should go over my legal affairs, because I think to the best of my knowledge, I'm not the father. I want to tell you that this discussion, however, is between Michael, his children and this person. It's not to be discussed who the father is over national television.

King: You don't feel you have to take a DNA test to prove anything?

Klein: If they want me to take a DNA test, they can have my DNA. I don't care at this point. My concern is his kids because I've never met children like this. These are the brightest children I've ever met, the best behaved children I've ever met. I don't want to destroy this relationship in any way, shape or form. I'll tell you this, no matter what, I will protect these children.

King: Did you go to the memorial service?

Klein: I couldn't, I watched it on television and it was still too emotional for me.

King: How did the story, you think, surface about you and fatherhood? Where did that come from?

Klein: I don't have any idea whether it came from ... Debbie Rowe, I have no idea.

King: Could it have come from Debbie Rowe?

Klein: Absolutely, because I phoned her as soon as Michael passed away. My greatest concern was what was going to happen to the children.

King: Do you think she should get custody?

Klein: I don't know if she should get custody. I'm very worried that the custody may go into a situation that is incorrect. I think the most important thing is there's this woman Grace who was their nanny, who is incredible. She should remain their nanny and help raise the children.

King: Have you gone to see the family?