(CNN) -- Billy Mays always let you know who you were talking to. 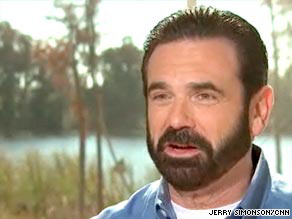 OxiClean pitchman Billy Mays, king of the "yell and sell" technique died Sunday morning at his home in Tampa.

The 50-year-old became famous for hawking products like OxiClean ("Powered by the air you breathe!") and Mighty Mendit ("Before you throw it away, let Mighty Mendit save the day!"). You needed more space in your closet, Mays had a special hanger for that. You wanted to hang a picture without putting a hole in your wall, he had some supernatural putty you needed to know about. You had a spill? One word. Zorbeez.

"I'm a pitchman, my business comes from the pitch, nothing else," Mays said recently in an interview with Portfolio. "My voice, my likeness is my livelihood. That's it. I keep it simple. I pick good products."

Mays' wife, Deborah Mays, released this statement Monday: "While it provides some closure to learn that heart disease took Billy from us, it certainly doesn't ease the enormous void that his death has created in our lives."

Handsome in a Brawny Towel Guy sort of way, Mays seemed to be as boisterous off camera as he was on, at least in interviews. He once compared his hands to "weapons" for the way they would whip around a product like a fast-dancing showgirl. And even when he didn't feel like cracking a smile, he dug deep.

"When I'm up against a wall, that's when Billy Mays performs best," he told a Fortune magazine writer earlier this year while driving his Bentley near his home. At the time, Mays' bum hip was hurting him.

He had his hip replaced last year and recently talked about using a special gel insole to help him with the pain -- another product he planned to push. How well does that work? Mays had demonstrated it informally in interviews by wrapping his hand in the insole and whacking it with a hammer.

That was just Mays: A sunshiny attitude and an "I've tried it" believability.

Even on Saturday, less than a day before his wife found him dead in their home, Mays was cheerful as he described being conked on the head by falling luggage when his US Airways flight had a rough landing at Tampa International.

Mays' success in the $300 billion infomercial industry was his ability to come off sincere, a magical feat for what is, essentially, huckstering, said Marian Salzman, partner at advertising PR giant Porter Novelli.

"He was the everyday Burt Reynolds; Burt in a next-door neighbor format," she said. "Burt Reynolds was not approachable, but Billy appealed to the 'Mrs. I Push My Cart in Wal-mart.'

Friend: "No better pitchman on Earth" »

"He was that good looking guy at the end of the cul de sac that you could talk to, and even though you know he was going to talk a lot of nonsense, there was going to be an integrity in there."

Mays often told interviewers of being raised in Pennsylvania, where he played high school football. He left college and began pushing products on the boardwalk in Atlantic City, New Jersey, a vibrant scene a few decades ago.

"There'd be one here, one there, you know, it's just the knife, the slicer, the Vitamix, you know, the Washamatic," Mays told ABC's "Nightline" in April. "And there would be tons of people coming in and you just had to, you know, attack these people, stop them, you know, where they're shopping and tell them the story and sell the product."

Perfecting what has been called the "yell 'n sell," Mays traveled around the country, selling various doohickeys and thingamabobs.

He met another salesman, Max Appel, a guru of cleaning products, and the two forged a friendship. In 1996, Appel scored a chance to go on the Home Shopping Network and wanted Mays to appear as the pitchman, according to Fortune. That was the day the wood cleaner Orange Glo was born, a golden road that ended in a $325 million pay day when Appel sold the company to Church & Dwight, the maker of OxiClean.

Celebrity was on the horizon. In the late 1980s cable TV was taking off as a marketplace as segments of late night airtime were relatively cheap.

There was a science to what would evolve as a cottage industry. Keep the pitches short and bright. Demonstrate, don't describe.

Noting the commercials air globally, Mays joked with Portfolio magazine that he speaks 57 languages. Affordability is an international language.

Mays also knew how to make fun of himself, including in a series of promos for ESPN.

"Billy Mays here for ESPN360.com, the revolutionary tool for watching sports," he shouts, crouching under a desk and pointing to a cable. "The secret is in the Internet connection live sports travel on this wire to the back of your desktop!"

Mays had recently starred in a Discovery channel reality show with fellow pitchman Anthony Sullivan, a Briton who has made many think, perhaps at 3 a.m., that purchasing a Smart Chopper is the best move they've made in months.

Sullivan and Mays appeared together in a TV Guide television interview to talk about the show.

"America will realize that Billy doesn't shout all the time," Sullivan said. "He has another volume."

All About Billy Mays