(CNN) -- Ed McMahon, the longtime pitchman and Johnny Carson sidekick whose "Heeeeeeerre's Johnny!" became a part of the vernacular, has died. 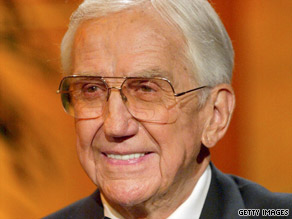 McMahon, 86, was hospitalized in February with pneumonia and other medical problems.

He had suffered a number of health problems in recent years, including a neck injury caused by a 2007 fall. In 2002, he sued various insurance companies and contractors over mold in his house and later collected a $7 million settlement.

Though he later hosted a variety of shows -- including "Star Search" and "TV's Bloopers and Practical Jokes," McMahon's biggest fame came alongside Carson on "The Tonight Show," which Carson hosted from 1962 to 1992. The two met not long after Carson began hosting the game show "Who Do You Trust?" in 1957. iReport.com: Share your memories of Ed McMahon

"Johnny didn't look as if he was dying to see me," McMahon, who was hosting a show on a Philadelphia TV station, told People magazine in 1980 about the pair's first meeting. "He was standing with his back to the door, staring at a couple of workmen putting letters on a theater marquee. I walked over and stood beside him. Finally the two guys finished, and Johnny asked, 'What have you been doing?' I told him. He said, 'Good to meet you, Ed,' shook my hand, and I was out of the office. The whole meeting was about as exciting as watching a traffic light change."

Though McMahon was surprised to be offered the job as Carson's sidekick, the two soon proved to have a strong chemistry. Carson was, by nature, introverted and dry-witted; McMahon was the boisterous and outgoing second banana, content to give Carson straight lines or laugh uproariously at his jokes (a characteristic much-parodied by comedians).

Carson made cracks about McMahon's weight, his drinking and the men's trouble with divorce. McMahon was married three times; Carson, who died in 2005, had four wives.

McMahon was also the show's designated pitchman, a talent he honed to perfection during "Tonight's" 30-year run with Carson, even if sometimes the in-show commercial spots fell flat.

For one of the show's regular sponsors, Alpo dog food, McMahon usually extolled the virtues of the product while a dog eagerly gobbled down a bowl. But one day the show's regular dog wasn't available, and the substitute pooch wasn't very hungry.

McMahon recalled the incident in his 1998 memoir, "For Laughing Out Loud."

"Then I saw Johnny come into my little commercial area. He got down on his hands and knees and came over to me. ... I started to pet Johnny. Nice boss, I was thinking as I pet him on the head, nice boss. By this point the audience was hysterical. ... I just kept going. I was going to get my commercial done.

" 'The next time you're looking at the canned dog food ...' -- he rubbed his cheek against my leg -- ... reach for the can that contains real beef.' Johnny got up on his knees and started begging for more. I started petting him again ... and then he licked my hand."

McMahon also promoted Budweiser, American Family Insurance and -- during the most recent Super Bowl -- Cash4Gold.com. Entertainment Weekly named him No. 1 on its list of TV's greatest sidekicks.

Edward Leo Peter McMahon Jr. was born in Detroit, Michigan, on March 6, 1923. His father was a promoter, and McMahon remembered moving a lot during his childhood.

He later joined the Marines and served in World War II and Korea.

Though McMahon was well-rewarded by NBC -- the 1980 People article listed his salary between $600,000 and $1 million -- his divorces and some poor investments took their toll. In June 2008, The Wall Street Journal reported that McMahon was $644,000 in arrears on a $4.8 million loan for a home in Beverly Hills, California, and his lender had filed a notice of default.

McMahon and his wife, Pamela, told CNN's Larry King that McMahon had gotten caught in a spate of financial problems.

"If you spend more money than you make, you know what happens. And it can happen. You know, a couple of divorces thrown in, a few things like that," said McMahon, who added that he hadn't worked much since the neck injury.

McMahon later struck a deal that allowed him to stay in the house.

He is survived by his wife, Pamela, and five children. A sixth child, McMahon's son Michael, died in 1995.