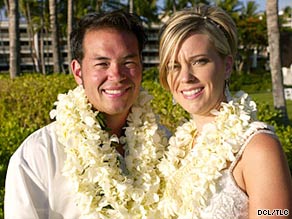 Jon and Kate Gosselin's show on TLC had record ratings last month as they dealt with marital problems.

The scene focuses on "crooked houses" -- outdoor mini-houses that the Gosselins are putting on their property that kids get to design -- and Jon and Kate's disagreement as to where they should be placed. After briefly showing the excited siblings playing in the houses, the scene gets right to the subject of the couple's troubled marriage.

"It doesn't matter where Jon and I are in our relationship," Kate Gosselin says in the video. "My kids still matter the most to me."

Reports have surfaced online that the couple will be announcing their divorce on Monday's show, but TLC/Discovery is not commenting on those reports. Watch why some think divorce is imminent

"We haven't really known where we were going, but we've been dealing with this for a long time. A slow progression that has not popped up one day -- it's not been, like, a secret," says Kate.

"We can't go back now, we can only go forward," says Kate in the segment. "And that's what we're gonna do." Blog: Is what's happening to 'Jon & Kate' fair?

This is the second preview clip that TLC has released this week. On Thursday, the network released a promotional spot where Kate says, "Recently, we've made some life-changing decisions, decisions that will affect every member of our family, ones that we hope will bring each of us some peace."

As she speaks, these words cross the screen:

"A family in turmoil ... A relationship at a crossroads ... Where do they go from here?"

Watch debate over whether move is ratings ploy »

The reality show chronicles the life of Jon and Kate Gosselin and their eight children -- sextuplets and a set of twins.

The show's fifth season debuted last month to record ratings, but dropped off to its previous season average in the third episode, which aired this week, according to The Hollywood Reporter.

The season opened amid tabloid reports accusing Jon of cheating with a 23-year-old, which Kate said she did not believe.

"We, as you know, have a reality show. Everyone wants to know everything about us," she told CNN's Larry King last month. "And I feel like this is a situation, you know, you can't believe everything that you read ... and so we are dealing with it privately."

"The bottom line is, I did not cheat on Kate," he said. "I'm sorry for putting my family in this awkward position, given some poor decisions and bad judgments I've made recently."

The poor judgments stem from the fact that Jon does not understand the full impact of being a public figure, Kate said.

"Jon is having difficult times realizing that you can't go to the grocery store without people whipping out their cell phones, calling everyone they know and taking pictures of you," she said. "He is dealing very poorly with it ... and these things are making him realize, 'Oh, my gosh, I cannot go anywhere without everyone knowing who I am.'"

The couple married in 1999 after meeting at a picnic in 1997, according to their Web site.

The mother of sextuplets and twins said they are committed to their family.

"I think the important thing to remember is that we love our kids to pieces," she said.

All About Jon Gosselin • Kate Gosselin