Foxworthy on Letterman: 'It was a flawed joke'

(CNN) -- David Letterman has been taking some heat and issuing some apologies for the off-color joke he made last week about Alaska Gov. Sarah Palin's daughter, but he found a sympathetic critic in comedian Jeff Foxworthy on Monday. 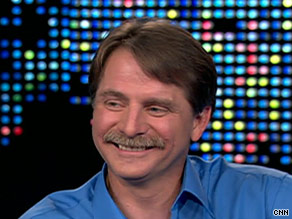 The best-selling comedy recording artist in history paid a visit to CNN's "Larry King Live" to talk about Letterman's gaffe.

"As a father of two teenage daughters, it was a flawed joke," Foxworthy said.

Letterman joked last Tuesday that Palin's "daughter was knocked up by Alex Rodriguez" at a recent Yankees game, stirring up an angry reaction from the Palin family. Letterman has since apologized twice for what he called "inappropriate" humor.

And Foxworthy agreed: "I don't think any kind of joke about someone having sex with a teenage girl is funny."

But Foxworthy's rebuke of the joke was gentle in tone, and he showed empathy for Letterman as well as the Palin family.

"As a comedian, you look at what Dave does," Foxworthy said. "You're trying to do this night after night, year after year, decade after decade -- at some point in the road, are you going to throw one out there you shouldn't have? Yeah."

Foxworthy said it's probably time to forgive and forget.

"It's about forgiveness," Foxworthy said. "He came back and apologized and said: 'Hey, the joke is flawed.' And to me you move on."

King asked what advice he'd give Sarah Palin if she received an invitation to appear on Letterman's "Late Show."

Foxworthy said he'd encourage the Alaska governor to accept it. "Life is about forgiveness. I think that makes her bigger to go on there and say 'I accept your apology'."

Letterman has insisted he was referring to Palin's 18-year-old, Bristol, who gave birth to a boy in December, and not her 14-year-old, Willow, in the joke.

Palin has called that a "weak, convenient excuse" for a joke that was"inappropriate" no matter which daughter was the target.

Foxworthy, the author of "How to Really Stink at Work," also made some "confessions" about his pre-comedy career in corporate America.

"I was at IBM for five years; I don't know how much work I did," Foxworthy said.

The comedian, who said he used to make prank phone calls to his boss at work to lure him back and forth from his desk, had this tongue-in-cheek advice for people about how far to take things on the job:

"You don't really want to get fired; you want to have a job. But you don't want to do it well, because you're going to be promoted, and that's a lot of pressure. Who can have any fun with that kind of anvil hanging over your head?"

Foxworthy is also the host of "Are You Smarter Than a 5th Grader" and talked about the appeal of a game show that spotlights how much people tend to forget after all those years of cramming in facts at school.

"It's a strange thing why the brain keeps some things," Foxworthy said. "Like I don't know why my brain has all the words to 'The Brady Bunch' theme song, but it deleted everything about triangles."