Boyle backlash -- but Susan set to cash in

LONDON, England (CNN) -- She may have finished second, but Susan Boyle continued to make newspaper headlines in the UK Sunday following her shock defeat in the final of "Britain's Got Talent." 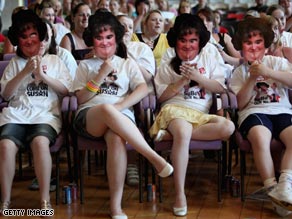 Susan Boyle fans watch her perform for the final time on "Britain's Got Talent."

"Boyle Backlash" said the headline in the tabloid News of the World, suggesting that the Scottish 48-year-old's alleged "four-letter tantrum" earlier this week had influenced millions of viewers to switch their votes to dance act Diversity.

The buildup to Saturday night's live final had been dominated by reports that Boyle lost her temper in a London hotel and had even considered pulling out of the talent show finale.

The Mail on Sunday said she had been been "comforted by psychiatrists" ahead of Saturday's final.

"They have a whole army of doctors, psychiatrists and experts all available to any contestant at any time. They have all been taking great care of Susan," the paper quoted "Britain's Got Talent" judge Piers Morgan as saying.

Watch how Boyle's rise to fame has been an emotional ride »

In Scotland, where crowds had gathered in Boyle's hometown of Blackburn in anticipation of victory, celebration parties were stopped in their tracks as the unexpected result was announced.

"Boyle foiled in final: Susan's dream is over," said the headline in the Sunday Mail.

Earlier, the paper said, Blackburn's community center had been "a sea of hands" as Boyle performed her signature tune, "I Dreamed a Dream" from the musical "Les Miserables."

"They stood with tears in their eyes as Susan hit every note. Stamping and chanting her name, her fellow villagers could not have been more proud."

But "the cheers were caught in the collective gullet ... as dance troupe Diversity gatecrashed this most expectant of parties," the Sunday Herald reported. "Jaws were left agape. Tears were shed. And then the supportive chanting of 'SuBo' began again."

Boyle could still be the real winner from the series, which became a global hit after clips of her audition of "I Dreamed a Dream" racked up millions of hits on YouTube. Did Susan deserve to win? Sound Off below

"£6M superstar" said the Sunday Mirror, claiming that "Britain's Got Talent" impresario Simon Cowell plans to take Boyle across the Atlantic to "conquer the U.S."

The News of the World upped Boyle's likely earnings on the back of "Britain's Got Talent" to £8 million ($13 million).

On top of a multi-million dollar record deal and share of album sales, Boyle is also set to earn from a Hollywood movie of her rags-to-riches life, a book deal, and millions more from image rights, endorsements and television appearances, the paper said.

In an interview with the News of the World, Cowell said Boyle could be the biggest star he had ever discovered.

"They don't care in America whether she wins a British TV show -- they care about the woman they saw singing on YouTube," a Cowell insider also told the paper. "If anything, £8 million in her first year might be an underestimate."

Meanwhile, competition winners Diversity are also set to cash in on their success with a film deal and a possible slot supporting Michael Jackson when the superstar plays a series of shows in London next month, the Sunday Mirror said. The group collected £100,000 ($162,000) for winning the final and will perform in front of Queen Elizabeth II at the Royal Variety Show later this year.

All About Susan Boyle • Britain's Got Talent