(CNN) -- You'd think someone who lasted 17 years as host of a television program in this day and age -- particularly a show as venerable as NBC's "Tonight Show" -- would be receiving praise and honor. 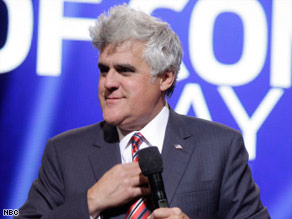 Jay Leno has rarely impressed critics, but he's been the No. 1 late-night host for almost 15 years.

Not so Jay Leno, whose final "Tonight Show" is Friday.

"Without fail, Leno's show fills an hour and kills an hour," wrote The Associated Press' Frazier Moore in a recent column on Leno's "Tonight" legacy. "For 17 years in late night he has vigorously played a game of lowered expectations, and met them."

Leno has never been the critics' favorite. David Letterman, who watched Leno receive Johnny Carson's "Tonight Show" desk but never Carson's blessing, has long been touted as the King of Late Night's true successor with his CBS show.

Conan O'Brien, who began his run as Letterman's NBC successor facing howls of derision, leaves it with some critics' hopes that he'll infuse the "Tonight Show," his new home as of Monday, with new life.

Watch how the late-night scene is changing »

And Leno? He'll leave behind the heavily rimshotted jokes, the Dancing Itos, the "Jaywalking" and "Headlines" bits -- all the things that drove Letterman and O'Brien fans up the wall -- with an audience of 5 million, still tops among late-night TV shows. And he'll be moving to prime time in September.

Some CNN iReporters, asked to choose between Leno and O'Brien, say it's no contest. iReport: Whom do you prefer?

"I feel like Jay Leno is more for men and women," said iReporter Melissa Fazli of Yorba Linda, California. "Where I think Conan O'Brien, only men get. ... I don't get his sense of humor."

"Jay Leno is like everybody's cool guy to go to. You want to hang out with Jay," said Kyle Aevermann of Itasca, Illinois.

Leno's comedy has usually played off his regular-guy persona. In the 1980s, when he was a regular guest on Letterman's "Late Night," Dave used to welcome a wound-up Leno with a jovial, "What's your beef, Jay?" To which Leno -- who looked like a cross between a class clown and a Boston greaser -- would respond with a well-turned wisenheimer riff on being stuck in the middle seat on airplanes or evil-twin plots on television. (YouTube is full of Leno's old "Late Night" appearances.)

Moore and other critics may criticize Leno for "lowered expectations," but upon taking the reins of "Tonight" on May 25, 1992, Leno opted for a more Jack Paar-esque "Tonight" show, mixing raconteurs among the comedians, actors and pop singers. Along with the usual entertainers -- Tom Cruise, Rosie O'Donnell -- among his early guests were opera singer Kathleen Battle, humorist P.J. O'Rourke and author-reporter Robert Krulwich.

But the show, also beset by infighting between Leno's then-executive producer and NBC brass, suffered in the ratings, often finishing behind Letterman's CBS "Late Show," which premiered in 1993.

Sources give various reasons for the turnaround -- a new set, Leno's growing comfort, broader jokes -- but generally pinpoint the moment Leno became late night's leader to the appearance of one guest: Hugh Grant.

The actor, who was promoting his film "Nine Months," appeared on "Tonight" in July 1995, just after his arrest for consorting with a prostitute. Leno led off the interview with a humorously exasperated, "What the hell were you thinking?" The audience picked up, and "Tonight" has led the late-night ratings ever since.

Leno, though he's been portrayed as a ferocious backroom infighter -- before striking a deal for the 10 p.m. talk-variety show he'll lead in the fall, he made no secret of his willingness to leave NBC -- generally lets criticism go by like a morning mist.

"Trash talking is a part of the competition," he said after hearing about a jab from ABC's Jimmy Kimmel. "You do your best. It gives you the impetus to prove them wrong."

And the man must be doing something right. Until being hospitalized last month, he'd never missed a "Tonight" taping. He's done 3,775 episodes, about 750 fewer than Carson, but in 13 fewer years. He still gets out on the road, recently putting on free shows for Detroit autoworkers.

In fact, the criticism aimed at Leno can be reminiscent of the complaints aimed at reliable-but-dull cars. When an auto executive was asked why his top-selling vehicle -- often compared to vanilla ice cream -- remained so popular, he pointed out that although some people may find vanilla ice cream boring, a lot of people like it.

Leno, a major auto buff, must know what he means.