BURBANK, California (CNN) -- Jay Leno ended his 17-year reign as the host of "The Tonight Show" Friday with the children of people who met and started families while working at the long-running late-night show during his tenure, according to audience members who attended the taping. 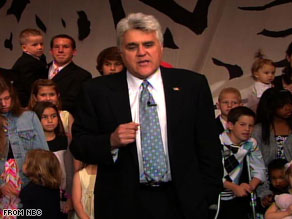 Jay Leno stands with the children of people who met and started families while working on the show.

"Jay said that's what he wanted his legacy to be," said Kevin Anthony of Miami, Florida. "His staff members, from stage managers to runners, who met, got married and had kids joined Jay on the stage and he took a picture with the 70 kids of those parents."

"Jay also thanked his wife," said Kathy Young of Los Angeles, "Jay said, when these kids are asked what was the 'Tonight Show' about, I want them to say, my parents met while working on the show and they had me. And that's what the 'Tonight Show' was all about."

Others in the audience said the show was about celebration. "It was amazing," said Justin Herring from Pittsburgh, Pennsylvania. "It was a celebration more than emotional," he said. "It didn't feel like a last show, more like a transition."

"When James Taylor sang the line, 'I'm 10 miles from Boston with a thousand miles more to go,' Jay wiped his eye," said Moore. "Jay explained that when he left Boston for Los Angeles, he was just outside of Boston when he heard that line and it gave him the courage to keep going," she said. "It's like the song is Jay's personal soundtrack."

Leno will be back in the fall with a new prime time show, and he's taking most of his staff with him. The new show will have some of the same elements as "The Tonight Show" but with some new features.

All About Jay Leno • Conan O'Brien