Lionel Richie: No rush for pregnant Nicole to marry

(CNN) -- He burst on the music scene in the 1970s with the Commodores and then went on to a major solo career with hits such as "All Night Long" and "Hello." 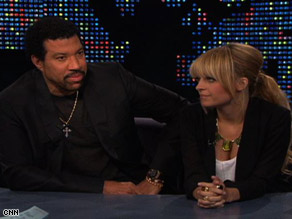 She made a name for herself on the TV series "The Simple Life," which followed the exploits of her and fellow socialite Paris Hilton, and in the tabloids.

Father-and-daughter Lionel and Nicole Richie have been making news for decades, but rarely together. In their first TV interview together in six years, they talked with CNN's Larry King about their relationship; her time in rehab; Lionel's first grandchild, Harlow; their growing family; and more.

The following interview, scheduled to air Thursday night, has been edited for brevity and clarity:

Larry King: You did "American Idol." A European tour. A new CD. You ever give thoughts of just cooling it?

Lionel Richie: My answer to that is very simple. I don't like fishing. I'm pretty much like you. This is my hobby.

Lionel Richie: You know what I decided to do on this album? Something different. Instead of controlling, which is what I love to do -- I'm the writer, I'm the arranger, I'm the producer, I'm the singer -- I decided [to] start another way. I just gave up the power completely. There is only one song on this album that I actually wrote, called "Eternity."

King: The "American Idol" thing. Was that fun? Why did you do it?

Lionel Richie: It's the best fun in the world. Danny [Gokey] was so wonderful. He kept saying, "Suppose I mess up or suppose I sing your line instead of my line," and I said, "You can't mess this one up. And if you feel like you want to sing my part, sing it loud and strong." And of course he nailed it.

It was so much fun to watch everybody backstage. The tension of what goes through that show, I don't think I [could] do it.

King: What is it like to be with her in this setting?

Lionel Richie: I'm so proud of her right now. There is such a pride that she has turned this corner. She is an amazing mother. I want the world to know where she is.

King: Now you're pregnant with a second child, right?

Nicole Richie: Yes, yes I am.

King: And the father [Joel Madden] is the same?

King: You going to get married?

King: But that's not important or paramount?

Nicole Richie: I think for both of us, we are going to do it because we want to, not because that's what you do.

King: What kind of grandfather is he?

Nicole Richie: Well, he's very animated. He smiles like this all the time, and so he's nothing but fun for Harlow. She absolutely loves him.

King: Nicole, you've been through some turbulent times. You've had drug abuse, wild-child behavior. Entered rehab in 2003. How have you come through all of that?

Nicole Richie: With the support of my family, really. I've always stayed really close with my mother [Brenda] and my father. I have really great friends. And I just have a really great circle around me who support me no matter what, don't judge me no matter how low I've ever gotten.

King: How did you deal with it, Lionel?

King: What was the toughest part about rehab?

Nicole Richie: It was right before "The Simple Life" came out. Just the fact that I couldn't do it in private really was unfortunate. But we didn't watch TV there or [had no] connection to the outside world, which I thought was really great. So I just focused on being positive there and focused on myself. And my parents were there with me. They came for family week. And so I just focused on that and everything just kind of fell in place.

King: When all of those troubles were going on, didn't it affect [your] performance?

Lionel Richie: Thank God for the stage. What the stage was for me was an outlet. It gave me a chance to kind of get away from it for a moment.

King: You said that you were not a good dad to Nicole growing up ... wasn't there for her. Do you regret that?

King: What kind of dad was he?

Nicole Richie: I really hate when he says that. I hate when he says that he wasn't a good dad because my memory of my childhood was nothing but good memories. I remember him coming down in the kitchen in the morning and singing songs and us playing. Was he gone a lot? Yeah. But he also toured a lot. Even when he and my mom divorced, it was kind of like he was on tour, so I was kind of OK with it.

And he's not perfect, he's a human and we went through phases of not speaking. I could sit here and I could say that I was a terrible daughter, too, but I am not going to say that.

King: How do you like her boyfriend [Joel Madden]?

Lionel Richie: Love him. Love him.

King: Don't you want them to get married?

Lionel Richie: I want them to take their time. I'm more interested in whether they like each other and whether they're best friends. Because that means they'll be great parents forever.

King [to Nicole]: You were adopted.

Lionel Richie: She stayed with us for two years before we even thought about legal guardianship.

King: Was there a doubt about doing it?

Lionel Richie: It was a tremendous responsibility, but I fell in love. Brenda fell in love. And once you fall in love, you don't know anything else.