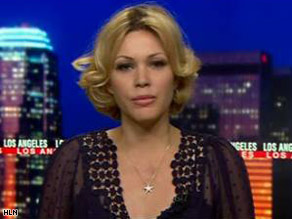 Shanna Moakler talks with HLN's Mike Galanos about why she resigned as director of Miss California USA.

Moakler, a former Miss USA, said she could not stay with Trump's Miss Universe organization "when I no longer believe in it."

As the Miss California USA co-executive director, Moakler did not hide her displeasure with Prejean during the controversy over her same-sex marriage comments and the emergence of semi-nude photos.

Moakler spoke exclusively with Mike Galanos, host of HLN's Prime News, about why she resigned.

Galanos: Why the change of heart after the press conference?

After the press conference when I went back to my hotel room, I just really sat down with myself. I don't believe she is going to comply with the contract, and I wasn't really happy with what happened at the press conference. I slept on it, and I woke up the next morning and was watching "The Today Show." I was sitting there watching her basically still make excuses. My biggest problem is that she's never really taken responsibility for herself. She's constantly pointing the finger at everybody else.

Galanos: You're talking about the pictures?

Moakler: Yes, the pictures. I couldn't stand by it anymore, and on top of it, the lying continues. Our contracts as state licensees were basically made invalid. For me, it was just too much.

Galanos: When you say the lies, are you talking about the pictures where she says it was a windy day and the wind blew her top open?

Moakler: Yes, in that particular point. It's such a complicated story with so many factors weighing in. For me, it was always about the contract. I didn't go to New York to get her decrowned. But I was hoping at some point in time at that press conference that there would be some accountability and there wasn't.

Galanos: What happened in that meeting? Did you and Carrie talk it out? Did it get heated?

Moakler: There was tension [and] it was a little heated. It was the first time since Miss USA that we were all together in the room. She had read articles, I had read articles, she had seen interviews, I had seen interviews, there were feelings. At the end of the day, I've known Carrie for a long time. She stayed in my home, she was my friend. We cared about each other so there was a lot of hurt, but we were talking, we were working things out. It went very quickly.

Galanos: You say "you cared" [and that] she was your "friend." Is the relationship over?

Moakler: I'm a mother. I have three children, and I still care about Carrie. I think she's been exploited and used as a tool for some of these other people's agendas and these different organizations. My biggest complaint is that it was never addressed and it was never reprimanded. It makes my contract as a state director void for my contestants. She was rewarded for that, and I don't think that's fair.

Galanos: Let's back track to the beginning. When you heard that answer -- and you're a same-sex marriage proponent -- were you angry with Carrie? Did you want her to lose at that point? What was your reaction?

Moakler: I wasn't angry; I was a little hurt. A great deal of our sponsors are gay and have supported her. I did not physically go and see her after the pageant, but I did write her. I congratulated her. I told her I was happy that she stayed true to herself, but I also conveyed that I think she hurt some people that really loved and cared about her.

Galanos: Why can't someone give that answer to that question and still be Miss USA?

Moakler: She can, she absolutely can. But there were gay judges on her panel of judges, and there were some people that didn't like that answer. One of the things you have to take into consideration is your judges.

Galanos: Do you think she lost it because of that answer?

Moakler: No, and it's been shown through the scores that she wasn't winning in points at that particular point. This has never been about her opinion. We all want her to have her opinion. She is able, and this is where the First Amendment argument has come into this.

The thing is, this is a young girl who was on a public stage, and I don't think she was prepared or ready to handle the backlash of the other side, and there was another side that has the same right to voice their opinion of not liking what she said. There was no persecution. It's just that there are other people that are allowed to disagree.

Galanos: When you were in the office with Donald Trump and you're about ready to go to the press conference, he says "Carrie's keeping the crown." Did you object at that point?

Moakler: I knew she was keeping the title before going in there. I had said to him, "What happens if she continues to breech her contract?" And he said, "I'll fire her." I said, "What happens if more pictures come out?" He said, "I'll fire her." I thought he would convey that in the press conference, but I didn't see that. It was more finger-pointing and basically being honored again. It was a hard pill to swallow. You have to understand that taking big business in New York back to California makes it hard for me to run my pageant.

Galanos: Is there something you could have done to calm things?

Moakler: [If she had spoken to me after the pageant,] I would have stayed by her and supported her and found out what the next steps were that she might have wanted to take. I would have helped her with some of the media training. I would have made sure she was more educated on the topic she was speaking about so when she did do these interviews and she was handling all of this pressure and heated debates [that] she would be able to speak intelligently and clearly. She would be able to express her opinions. I would be able to convey to her how to understand why she's getting attacked and where these things are coming from. There were so many organizations that latched on to her, I didn't even stand a chance.