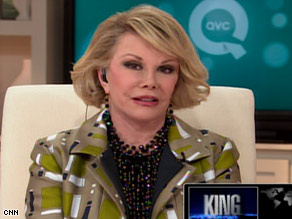 Trump selected Rivers as this season's winner of "The Celebrity Apprentice," and they appeared on "Larry King Live" Monday night, full of their classic candor.

Among the topics covered: Rivers' long-running war of words with runner-up Annie Duke, her dust-up and make-up with Clint Black and the "reason" she is against same-sex marriage. And the Donald explains why Rivers had what it took to emerge the winner.

Larry King: Donald, was it a tough decision?

Donald Trump: Well, it was. Joan fully understands it was a very, very tight race. And Annie [Duke] was terrific and Joan was terrific. In the end, I decided to go with Joan. She displayed tremendous courage. She really took a lot of abuse over the course of 14 weeks.

King: Joan, in last night's finale, you beat poker champion Annie Duke. You and Annie were still at each other up until the final moments. Let's take a look.

[King shows a video clip from "The Celebrity Apprentice"]

Joan Rivers: You're not worse than Hitler ...

Duke: This is what I'm saying. If it happened in a real boardroom, she would have to be fired or that would be actionable.

Rivers: ... I have run a business for 20 years honorably. I have never fired anybody. I am the Number One jewelry business on television, with honor.

Trump: And, Larry, that was the nice part.

King: Joanny, where did you come up with that 'worse than Hitler' crack?

Rivers: Oh, I don't know. You know, you're always saying things. Hitler is the worst villain in the world. So when you really get furious at someone, you say, 'Oh, you're a female Hitler' or something, you know? It's just an expression. But I stand behind it.

King: What did she do to you?

Rivers: She was very duplicitous ... there was so much mud-slinging, which I'm not going to go into. I was told she said she wished I would die; she said I was a cancer.

King: What did you make of that squabble, Donald?

Trump: Well, I liked it very much. ... Especially this morning, when the ratings came in, because it was a ratings bonanza last night for NBC.

King: What does Joanny get now?

King: What surprised you about this contest?

Trump: Well, I was just impressed with the intelligence, with the energy and verve that Joan had. I mean, Joan's energy was beyond everybody else's. And she wasn't necessarily the youngest person on the panel.

King: Joan, what surprised you about this experience?

Rivers: How it became so much more than a television game or a show. It became absolutely something I wanted to do. It was like I was going to win for my charity.

King: What got you so emotionally involved, not just with Annie, other contestants?

Rivers: Larry, I play totally full-out. And you get very worn down. It's all these weeks and weeks of getting up at 5:30 in the morning, working until 11:00 at night, no assistants to help you. You're out there on the firing line.

King: Joan, by the way, written a Web exclusive for us about her "Celebrity Apprentice" win. Click here for Joan Rivers' blog, exclusively on CNN.com

King: Do you think you'll ever make up with Annie?

Rivers: Well, I went over afterward; I went over to congratulate her, and I made her stand up. ... Nobody lost last night, for God's sake. No one heard of Annie Duke before this show. Now everyone's heard of her. Her charity made $700,000. ... And what did upset me was on the way out, her whole group gave us the finger and booed. And I thought that was .. not good. Not good.

King: Why does this get so dramatic?

Rivers: Because it's "Lord of the Flies." You have no sleep.

King: Weren't you and Clint Black kind of mad at each other for a while and now it's OK?

Rivers: Oh, yes. Clint is a chauvinist. My joke is now he wouldn't even let his wife have Equal in her coffee. You know, that's Clint. But Clint is Clint. You get very angry at him, but at least you know that's Clint. You know what's going to be dealt to you.

King: What did you learn from doing this?

Rivers: So many people in this country are counted out from the age of 60. When I walked in, I looked them all over, I thought: 'I can take you all with one behind my back at 75.'

King: Did you expect to win?

Rivers: Truly, no. Donald plays it so close and so intelligently. I did not know until they called out her name. I really thought they were going to say, Joan you're wonderful, but you're too emotional and blah, blah, blah. And Annie raised so much money -- which, indeed, she did. I was in shock and thrilled.

Rivers: Can I say one thing quickly?

Rivers: Gay marriage, I am so against it because all my gay friends are out. And if they get married, it will cost me a fortune in gifts.