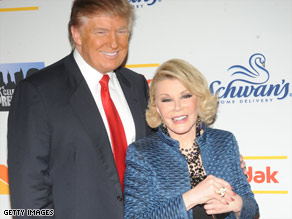 After weeks of competition, the 75-year-old dynamo beat out 15 other contestants, including Dennis Rodman, Tom Green and Brian McKnight, to take the top spot in this season's edition of the reality show hosted by Donald Trump.

Rivers went up against poker champion Annie Duke in Sunday night's finale in which both women were charged with planning a VIP party and silent auction for the last and deciding task.

"They're both tough, they're both smart and they both hate each other," Trump observed at the beginning of the show.

The apparent tension between Rivers and Duke continued in the final boardroom, part of which played out in front of a live audience, with both finalists bickering and interrupting each other repeatedly as Trump looked on.

In the end, Duke raised far more money at her event, but Rivers was able to attract more celebrities and provide a better overall experience for the guests at her party, and Trump declared her the winner of the competition.

"Your level of energy has been amazing," he told Rivers.

If the series thrives on conflict, it got plenty of mileage out of Rivers. She blew up at country singer Clint Black, referred to another contestant as a "stupid blonde" and smashed a champagne glass out of frustration at one point.

But Rivers seemed to be especially infuriated by Duke, calling her a "despicable human being" -- the tamest of the insults she hurled in Duke's direction over the course of the series.

Rivers even walked out in a huff after her daughter, and fellow contestant, Melissa was fired from the show. The exit, complete with bleeped obscenities, was turned into a cliffhanger of sorts when it seemed like Rivers might not come back, but she returned to the show for the next task.

You might think a show that's best known for the phrase "You're fired" might not do so well in a bad economy when thousands of people have heard similar words for real at their workplaces, but the series averaged more than 8 million viewers a week, according to Entertainment Weekly. EW: Did the right one win?

"The Apprentice" made a splash when it debuted in 2004, making a reality television star out of Trump and contestants such as Omarosa Manigault-Stallworth. For several seasons, the series took ambitious young mogul wannabes, divided them into teams and had them compete in tasks that ranged from selling lemonade to creating advertising campaigns for major corporations.

The contestants vied for the chance to run one of Trump's companies for a year, and Trump fired someone from the losing team each week until he selected an apprentice. Over the years, ratings for the show gradually declined, but the formula was revived in early 2008 with the first season of "The Celebrity Apprentice."

The tasks, pressure-cooker atmosphere and boardroom bickering stayed the same, but the competition now featured contestants with varying degrees of fame and focused on raising money for charity.

The first "Celebrity Apprentice" top spot went to Piers Morgan, the prickly judge on "Britain's Got Talent" who made news this spring when he invited singing sensation Susan Boyle to dinner after her memorable performance on the show.

Morgan also made several appearances on this season's "Apprentice," sitting in as Trump's "eyes and ears" during one episode and interviewing the final four candidates in another.

Morgan's aggressive questioning seemed to annoy the celebrities, especially Jesse James, who glared icily at Morgan when he kept asking him why he did not turn to his wife, Sandra Bullock, for help in raising money during the various tasks.

Perhaps Bullock might be tempted to try competing on the show herself.

NBC announced last month it is bringing back "The Celebrity Apprentice" for another installment in the spring of 2010, Entertainment Weekly reported.

All About Joan Rivers • Donald Trump