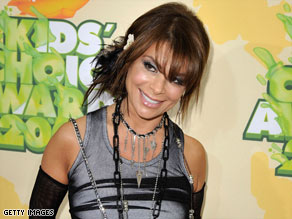 Paula Abdul told Ladies' Home Journal that she struggled with a drug problem.

The former pop star released a new song this week and will take the "American Idol" stage Wednesday night to perform it.

Abdul, in an interview for the Ladies' Home Journal's June issue, acknowledged what she has denied for years -- that she had a drug problem.

But last November, days after an obsessed fan apparently killed herself outside Abdul's home, she went to a health spa where weaned herself off prescription pain medications she had used for a dozen years.

"Withdrawal -- it's the worst thing," she told the magazine. "I was freezing cold, then sweating hot, then chattering and in so much pain, it was excruciating. But at my very core, I did not like existing the way I had been."

Abdul acknowledged several years ago that she used medications to kill the pain for a series of injuries, but this is apparently her first admission she was hooked on them.

When People magazine asked her about it in 2005, she chose her words carefully:

"Drugs? I'm not addicted to pills of any kind," Abdul then said.

Her painkillers were, in fact, not pills. Abdul wore a patch that delivered a pain medication about 80 times more potent than morphine, she told Ladies' Home Journal.

Abdul's slurring of words and apparent confusion on "American Idol" and during interviews stirred rumors of a drug problem in recent years.

She told the magazine, though, she was never under the influence during a show.

Her pains began with a cheerleading accident at age 17, but were compounded by later mishaps -- including a stage accident in 1991, a car wreck in 1992 and a plane crash in 1993, she said.

The persistent hurting is almost gone after a 15th surgery, she said.

After two short marriages, Abdul said she is still looking for a soul mate.

"I'm working on finding that guy," she said.

She told Seacrest she only decided last week to accept the invitation to perform it live on the TV show.

"I was invited by the producers and I wasn't sure it I was going to do it because timing was of the essence," she said.

She said she put her performance together over the weekend.

Abdul's "American Idol" contract ends with this season, and she told Seacrest she did not know if she would be back to judge next season.