WASHINGTON (CNN) -- The case of Janet Jackson's "wardrobe malfunction" on national television -- and subsequent fines against CBS -- will be re-examined at the order of the Supreme Court. 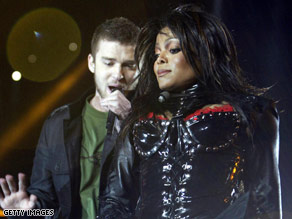 Justin Timberlake and Janet Jackson perform at the Super Bowl just before the infamous "wardrobe malfunction."

The justices Monday sent the case back to a federal appeals court in Philadelphia that had thrown out a $550,000 government fine against the broadcast network and its affiliates for airing the incident during halftime of the 2004 Super Bowl. The pop singer's breast was briefly exposed during a performance with singer Justin Timberlake.

After viewer complaints and national media attention, the Federal Communications Commission said the Jackson incident was obscene. In addition to CBS Inc., 20 of its affiliates also were fined.

Congress quickly reacted at the time to the visual shocker by increasing the limit on indecency fines tenfold, up to $325,000 per violation per network. And it said each local affiliate that aired such incidents also could be punished by the same amount.

But the 3rd U.S. Circuit Court of Appeals concluded the communications commission had acted "arbitrarily and capriciously."

The Supreme Court's action marks the second time in recent days that it has dealt with cases involving broadcast standards. Last week, the justices narrowly upheld the authority of the Federal Communications Commission to punish networks for airing profanity.

The government clampdown on obscene images and words began in 2003. Enforcement of the law, as well as fines and sanctions for the incidents, have been put on hold while the cases are being argued.

The television networks say their scripted shows no longer air nudity, racy images or expletives, even after 10 p.m., when some potentially vulgar words are permitted.

They worry, however, about unplanned, often spontaneous indecent or profane incident at live events, such as awards shows and sporting events. Company officials say such programs are often on a five-second delay, and censors are on hand to bleep any offensive language. But some indecent words can slip through, they admit, and they want to be protected from heavy government fines.

"This past summer, CBS edited into a show that had to go through multiple reviews, by multiple people in the organization, the F-word," said Tim Winter, who heads the Parents Television Council, and is supporting the FCC's efforts. His group advocates "responsible" programming, and warns parents about questionable program content. The show in question was "Big Brother 10," a taped series.

The Jackson incident was not on a five-second delay.

CBS issued a statement Monday afternoon it is confident that the appeals court "will again recognize that the Super Bowl incident, while inappropriate and regrettable, was not and could not have been anticipated by CBS."

The issue is an important one "for the entire broadcasting industry," it said, "because it recognizes that there are rare instances, particularly during live programming, when despite best efforts it may not be possible to block unfortunate fleeting material."

In the case involving profane language, the high court concluded 5-4 that the communications commission has the authority to sanction broadcast TV networks that air isolated incidents of profanity, known as "fleeting expletives."

But the justices in that case refused to decide whether the commission's policy violates the First Amendment guarantee of free speech. It ruled only on their enforcement power. The justices ordered the free-speech aspect to be reviewed again by a federal appeals court.