(CNN) -- Bea Arthur, the actress best known for her roles as television's "Maude" and the sardonic Dorothy on "The Golden Girls," has died of cancer, a family spokesman said Saturday. 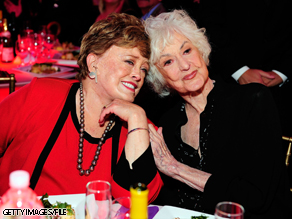 Spokesman Dan Watt said that Arthur died Saturday morning at her home in Los Angeles, her family by her side.

She is survived by her sons Matthew and Daniel and grandchildren Kyra and Violet, he said.

No funeral services are currently planned, Watt said, adding that the family asked that donations be made to either the Art Attack Foundation or PETA in lieu of flowers.

Arthur's opinionated Maude first appeared on Norman Lear's "All in the Family" as Edith Bunker's cousin, and was so popular that Lear created a spin-off series.

In the '70s, "Maude" was ahead of the social curve, tackling hot topics not usually mentioned on situation comedies -- pornography, race relations and, in an episode titled "Maude's Dilemma," abortion.

That episode spawned demonstrations and generated hate mail for Arthur -- when Maude and husband Walter (Bill Macy) decided on that episode they were too old to raise a child.

But many saw Maude as an enduring icon for women's liberation -- a big deal for the shy, Jewish girl born Bernice Frankel in New York City.

During the Depression, Arthur's family left the Big Apple and opened a clothing store in Cambridge, Maryland. By the time she was 12, Arthur was nearly 5 feet, 10 inches tall, and self-conscious about her height.

But she masked her insecurity with comedy and eventually returned to New York to study acting. Along the way, she had a short-lived marriage she never spoke about, but she kept the last name -- Arthur.

The young Bea Arthur earned a living singing and doing stage work on Broadway and off-Broadway. Critics delighted in her haughty, serpent-tongued deliveries.

Her first television appearance came in 1951 in a long-forgotten series called "Once Upon a Tune," but she quickly made a name for herself with appearances on "Studio One," "Kraft Television Theatre" and "The Sid Caesar Show."

Arthur drew attention in "Threepenny Opera" on Broadway with Lotte Lenya, but she really turned heads in 1964 originating the role of Yente the Matchmaker in "Fiddler on the Roof."

In 1966, Arthur won a Tony Award for the caustic Vera Charles in the play "Mame," playing opposite Angela Lansbury in the title role. Eight years later, she reprised the role in the film version opposite Lucille Ball, but by then she was already well-established as Maude.

Arthur left "Maude" in 1978, making television and some film appearances afterward. She starred in a short-lived series, "Amanda's," in 1983 and then joined the cast of "The Golden Girls" in 1985 with Betty White, Rue McClanahan and Estelle Getty.

Her role as Dorothy Zbornak gave Arthur her other major television success as one of four older women living together in Florida. (Getty played Arthur's mother). The role earned Arthur a second Emmy -- the first was for "Maude."

Arthur left the show after Dorothy remarried at the end of the 1991-92 season. White, McClanahan and Getty continued for another season on the show, renamed "The Golden Palace," but the show lasted only one season without Arthur.

Arthur entered semi-retirement after the show ended in 1992, returning to television in sporadic guest appearances and appearing at several celebrity roasts. In the early part of this decade, Arthur appeared in several one-woman shows.