(CNN) -- The Scottish woman who became an Internet singing sensation after her performance on a British talent show said Friday she doesn't want fame to change her. 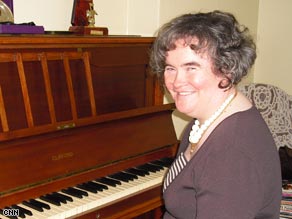 Susan Boyle at home with her piano.

Susan Boyle, 47, has said she's still the same humble girl next door despite her knockout singing on "Britain's Got Talent."

She shocked and inspired the audience, judges, and Web watchers with her rendition of "I Dreamed a Dream" from the musical "Les Misérables" in the first round of the show.

"I wouldn't want to change myself too much because that would really make things a bit false," she told CNN's "American Morning" on Friday. "I want to receive people as the real me, a real person."

Boyle's appearance belied her talent, but in the end it was the very reason she won over the audience. There is speculation TV producers might give Boyle a makeover for the rest of the show, but she refused to say whether she'd accept one. iReport.com: Have you been judged on looks?

A clip of Boyle's performance on the talent show had more than 15 million views on YouTube by Friday, and the world's media have beaten a path to her door in Blackburn, Scotland.

While she said she's the same person -- the shy girl who has never been kissed -- it's clear that Boyle's life already is changing.

In her home are heaps of fan mail and cards from well-wishers. Throngs of fans have been shrieking at her doorstep begging for her autograph.

Boyle said she's still in shock and overwhelmed by her overnight stardom.

Watch how Boyle sees herself »

During an earlier interview with CNN's Atika Shubert, Boyle expressed amazement at people's reaction to her -- "the way everyone seems to have embraced me, the way they seem to have apparently fallen in love with me," she said.

The singer acknowledged she noticed the initial sniggers when she got onstage for her performance on "Britain's Got Talent." But she said she didn't let it get to her. If nothing else, it fueled her motivation.

"I just thought mentally, I'll show them, so I did," she said. "If people are cynical, you try and win them 'round and it worked. It must have been a miracle, but it worked."

Boyle still has a long way to go -- having just gotten through to the second round of "Britain's Got Talent" after judge Simon Cowell described her first performance as "extraordinary."

If she can make her way through the show's final rounds, she will get to sing for Queen Elizabeth II at the Royal Variety Show. Boyle has promised to be on her best behavior if she gets that far.

"Whatever comes my way, I am ready. It would be lovely to sing for the queen. There would be less of the carry-on from me and more of the singing.

"She is a very regal lady, very nice, so I would be nice, too, and just get up there and give it a bit of wellie [try]," Boyle told the show's Web site.

Boyle began singing in school productions at 12. She had private lessons and won local competitions, but a professional career never took hold partly because of circumstances at home.

Boyle said she cared for her aging parents, both of whom have died.

Thoughts of her mother led Boyle to apply to be on the talent show, she said.

"She was my inspiration, and she was the driving force behind my application," Boyle told CNN. "I felt it was a tribute to her. She was a wonderful lady."

Watch Boyle say, "It must have been a miracle" »

Boyle said she was trying to take her newfound fame in stride.

"It's a challenge. Life is a challenge sometimes, but this is different. And I like to test myself.

"If it all gets too much and they lock me up, I want a great big straitjacket with spots on it -- a pink one ... and a big zip on the back so I can escape."

Cowell reportedly is trying to piece together a record deal for Boyle, an unemployed charity worker who lives with her cat, Pebbles. But Boyle said she's not focusing on any of that yet -- she still spends her time concentrating on the current competition.