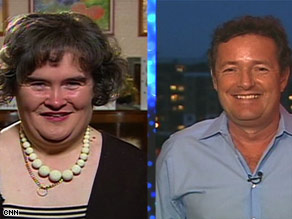 Judge Piers Morgan admits that he expected Susan Boyle's audition to be a joke before she began singing.

During a taping of the show Friday, she nailed a verse of Celine Dion's "My Heart Will Go On" after King asked her to sing.

"Amazing. That was just absolutely stunning," said "Britain's Got Talent" judge Piers Morgan, who was also a guest. "To sing that with no musical backing is unbelievable. You have the voice of an angel, Susan."

The 47-year-old Boyle's frumpy attire and awkward mannerisms drew snickers and eye-rolling from her audience before she belted out a pitch-perfect number from "Les Miserables" at an audition for the talent contest, making her an overnight sensation.

An unemployed charity worker who lives alone with her cat in Scotland, Boyle has inspired millions with a performance that flies in the face of pop music's penchant for pre-processed princesses. A clip of her audition had more than 19 million views on YouTube by Friday evening.

Boyle, who did a repeat performance of "I Dreamed a Dream" via satellite on CNN's "Anderson Cooper 360" Thursday night, told King she was aware of the snickers her appearance prompted at the audition.

"That doesn't bother me because I knew I had to get on with my act ... ," said Boyle, again speaking by satellite. "I wasn't sure how I would be received, so I just thought I'd give it a whirl."

Morgan, too, acknowledged the laughter, including his own.

"I sort of feel like apologizing to Susan," he said. "I'm sorry, because we did not give you anything like the respect we should have done when you first came out."

He said the judges had been through a long day with "lots of terrible auditions."

"And then you came out and we thought you were going to be a bit of a joke act, to be honest with you," he said. "And then I can remember ... that second when you had begun to sing, and I had never heard a more surprising, extraordinary voice coming out of somebody so unexpected."

To win the show, which would give her the chance to sing in front of Queen Elizabeth II, Boyle must survive a live semifinal next month and then a final performance if she gets through that.

Watch how things have changed in Boyle's hometown »

"She's the most odds-on favorite ever on 'Britain's Got Talent' at this stage of the competition," Morgan said. "But Susan knows there are two big hurdles left. Anything can happen in a live show."

There's already been talk of a recording contract and world tours for Boyle. But she said she's staying focused on the competition for now.

She said she has no plans to get a makeover or alter her wardrobe -- "Why should I? Why should I change?" -- but did predict one big lifestyle change.