(CNN) -- Donald Trump visited "Larry King Live" on Wednesday night to tout his new book, "Think Like a Champion." In a wide-ranging interview, Trump shared his thoughts on how to prosper in this economy, Bernie Madoff, how President Obama is doing, taxes and his daughter's love life. 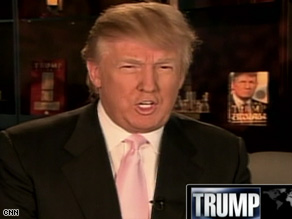 Larry King: Why this book?

Donald Trump: A lot of people wanted me to do a book right now about these troubled times that we're all in.

King: Why [is it a] good time for an entrepreneur and not necessarily for others?

Weren't you involved with [Bernie] Madoff?

King: A little bit, yes. You weren't, huh? How did you resist him?

Trump: Honestly, I got lucky. He might have duped me like he did a lot of other people. He is a disaster. But now he's where he belongs.

King: With troubled times like this for the average guy, is this the time to think like a champion?

They have houses by the thousands. And you go see that bank and you make a deal.

King: How do you assess [Barack Obama]?

Trump: Well, I really like him. I think that he's working very hard. He's trying to rebuild our reputation throughout the world. The previous administration was a total disaster, a total catastrophe.

And, you know, the world looks at us differently than they used to. ... He was handed a pretty bad deck of cards. And I'm not saying I agree with everything he's doing. ... I do agree with what they're doing with the banks. Whether they fund them or nationalize them, it doesn't matter, but you have to keep the banks going.

King: Do you assess him as a champion?

Trump: Oh, yes, he's a champion. I mean, he won against all odds. When he first announced, people were giving him virtually no chance. And he's just done something that's amazing.

King: Is fear harmful in this [economic] situation, Donald, or is it realistic?

But you have to do something about it. And that's what I write about in the book. You go out. You go to the right place, where there's better employment. You get a trade where they really need people.

King: Have you had to lay off people? Because it seems everyone has had to do that.

Trump: It's a sad thing, but whether it's "The Apprentice" or not, the fact is you have to say to some people: "You're fired." The world is different.

King: You said that this is a good time to buy real estate. What about financing? What if you want to buy and you can't get the mortgage?

Trump: Larry, this is a great time to buy real estate.

And as far as financing is concerned, the only financing you should be thinking about is seller financing. If the seller won't give you financing, don't do it, because the banks are not doing their job. They're not providing financing for deals.

King: New York state is planning a so-called millionaire's tax. It would affect those with incomes starting at $300,000. Yea or nay?

It's hard, psychologically, for me to leave, but very easy physically.

King: OK. But then we would debate reasonable.

And, by the way, ... Saddam Hussein did not knock down the World Trade Center.

King: Has the economy at all cramped your lifestyle? Anything you had to change?

King: There's buzz that your beautiful daughter Ivanka is engaged or getting engaged. What's up?

Trump: She has a beautiful boyfriend. He's a great guy, but they are not engaged.

King: Would you like them to? Is he the kind of guy you would except as a son-in-law?

Trump: He certainly is a wonderful guy. But it's all up to her. If she's happy, I'm happy.