(CNN) -- Pro wrestling legend Hulk Hogan, embroiled in a bitter divorce with his wife, Linda, told Rolling Stone magazine he can "totally understand" O.J. Simpson, the former football great found liable for the deaths of his wife and another man. 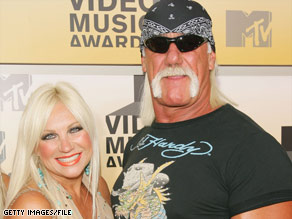 "I could have turned everything into a crime scene like O.J., cutting everybody's throat," Hogan said in the interview for a feature that will run in Friday's edition of the magazine.

"You live half a mile from the 20,000-square-foot home you can't go to anymore, you're driving through downtown Clearwater [Florida] and see a 19-year-old boy driving your Escalade, and you know that a 19-year-old boy is sleeping in your bed, with your wife ...

"I totally understand O.J. I get it," Hogan said.

A spokeswoman for Rolling Stone magazine confirmed the quote to CNN.

It has been widely reported that Linda Hogan, 49, is dating a younger man. She filed for divorce in 2007 after nearly 25 years of marriage.

Simpson was found not guilty of murder in the 1994 stabbing deaths of his wife, Nicole Brown Simpson, and her friend, Ron Goldman, but was found liable for their deaths by a civil court jury.

Simpson later was found guilty in a Las Vegas, Nevada, armed robbery case and sentenced in December to up to 33 years in prison.

A spokesman for Linda Hogan said Wednesday that the statement amounts to a death threat and that her attorney is "weighing all options necessary to protect his client."

"Sadly, his recent comments remind us that his definition of fair is much different than what the law dictates," Linda Hogan said in a written statement.

Her spokesman, Gary Smith, linked the comments to the 55-year-old Hogan's three-decade career, during which he held multiple championship titles and, during his heyday in the 1980s, was easily the most popular wrestler in the world.

"We have always maintained that the fear that Linda has had to live with comes from the rage and instability much too often associated with pro wrestlers," Smith said in the statement.

CNN was unable to reach Hulk Hogan's publicist for comment on Wednesday. In comments to Access Hollywood, a spokesman said the comments were not intended as a threat and that Hogan "in no way condones" Simpson's actions.

"As part of a larger conversation, he referred to it to exemplify his frustration with his own situation," the spokesman said.

CNN's Marc Balinsky and Doug Gross contributed to this report.