(CNN) -- What do you do when you're NASA and comedian Stephen Colbert wins your contest to name the new wing for the International Space Station? You name an orbital exercise machine after him. 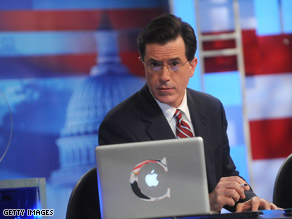 With the help of a legion of fans, Colbert got the most votes in the space agency's online poll soliciting names for Node 3, which will be called Tranquility after the Sea of Tranquility, where Apollo 11 landed on the moon.

"Your name will be in space, in a very important place," Williams said as Colbert reacted in mock disgust to her announcement of the node's new name.

"I think a treadmill is better than a node ... because the node is just a box for the treadmill," Colbert deadpanned. "Nobody says, 'Hey, my mom bought me a Nike box.' They want the shoes that are inside."

Colbert's campaign generated welcome attention for the oft-forgotten International Space Station, but it also presented a dilemma for NASA.

The runner-up name to Colbert was Serenity, which was more in line with the names of the other nodes. Harmony, the name given Node 2, was chosen by a poll of kindergartners in 2007.

The publicity caused by Colbert's interest in Node 3 turned out well for the space agency.

NASA changed its plan to announce the new name at the end of April at the Kennedy Space Center in Florida when Colbert's producers invited them to do it on their show, the space agency said.

Pennsylvania Congressman Chaka Fattah, who stepped in the naming fray in March, when he said Colbert had won the naming contest fair and square, called the decision a good compromise.

It's "one small step for NASA and a giant step for the Colbert nation," the congressman said, playing off Neil Armstrong's line when he first set foot on the moon in 1969.

Colbert's loyal fans have, in the past, bombarded polls to have things named after him.

In 2006, Colbert out-polled every other name in a bridge-naming contest in Hungary. The country's government later said it cannot name the bridge after the comedian because he does not speak Hungarian and is not dead.

However, ice cream maker Ben and Jerry named a new flavor in honor of him, calling it Colbert's AmeriCone Dream. Virgin America also named one of its planes Air Colbert.