(CNN) -- NASA has clamped a tight lid on its choice of a name for the international space station's new wing, but it's sending an astronaut to break the news to comedian Stephen Colbert on Tuesday night. 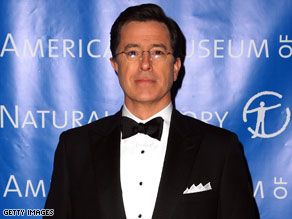 Stephen Colbert has threatened to become "space's evil tyrant overlord" if he doesn't get his way.

The name "Colbert" received the most votes in an online poll soliciting names for Node 3, a connecting module and its cupola. The comedian has warned NASA he would "seize power as space's evil tyrant overlord" if the results are not honored.

Astronaut Sunita "Suni" Williams will reveal the decision on the comedian's show, "The Colbert Report," which will be taped in New York on Tuesday afternoon and broadcast later at 11:30 p.m. ET on Comedy Central.

"I certainly hope NASA does the right thing," Colbert said in a news release from the space agency. "Just kidding, I hope they name it after me."

Colbert's campaign generated welcome attention for the oft-forgotten space station, but it also presented a dilemma for NASA.

The contest rules spelled out that NASA reserves the right to "select a name in accordance with the best interests of the agency. ... Such name may not necessarily be one which is on the list of voted-on candidate names."

The runner-up was Serenity, which was more in line with the names of other nodes. In 2007, a poll of kindergartners chose the name of Harmony for Node 2.

Colbert demanded NASA allow "democracy in orbit" on his show two weeks ago.

"Either name that node after me or I, too, will reject democracy and seize power as space's evil tyrant overlord," he said.

NASA has welcomed the publicity from Colbert's interest.

NASA changed plans to announce the name in late April at Kennedy Space Center in Florida when Colbert's producers invited officials to do the show, the space agency said.

Node 3 -- whatever it's called -- will house many of the space station's life support systems. A space shuttle mission is set for later this year to deliver the module to the space station, NASA said.

Colbert's loyal fans, known as the "Colbert Nation," have in the past bombarded polls to have things named after their idol.

The comedian outpolled every other name in a bridge-naming contest in Hungary. The country's government later said it couldn't name the bridge after him because he didn't speak Hungarian and wasn't deceased.

But ice cream maker Ben & Jerry's named a flavor in honor of him, calling it Stephen Colbert's AmeriCone Dream. And Virgin America airline named one of its planes Air Colbert.

All About Stephen Colbert • NASA